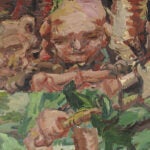 Curated by David Bindman, the 2010 Sheila Biddle Ford Foundation Fellow at the Du Bois Institute, and Anna Knaap of the Jesuit Institute of Boston College, the exhibit is held in conjunction with Harvard Art Museums and coincides with the publication of “The Image of the Black in Western Art” by Harvard University Press. The 10-book series is co-edited by Bindman and Henry Louis Gates Jr., Alphonse Fletcher Jr. University Professor and director of the Du Bois Institute.

“Never before has the Rudenstine Gallery housed art of this provenance,” said Gates. “But the works of art in this exhibition share, with the African photography and African-American painting we have showcased before, the complexity of their representation of people of African descent.”

The Rudenstine Gallery is the only exhibition space at Harvard, and one of the only in Boston, devoted to works by and about people of African descent. The gallery hosts rotating exhibits and accompanying artist talks, and its curatorial mission is to support both historical and contemporary practices in the visual arts.

The exhibit is a launching point for “The Image of the Black in Western Art,” a book series first created by collector Dominique de Menil in 1960 and based on the Du Bois Institute’s archives of 26,000 images of black people in Western art, from classical Greece and Rome to the 21st century. The series comprises revamped full-color editions of de Menil’s five original volumes plus three new ones, which will be followed by the final volume on the 20th century.

Gates, Bindman, and other scholars involved in the book series will participate in the M. Victor Leventritt Symposium, co-sponsored by the Du Bois Institute and Harvard Art Museums, on Nov. 15. The symposium will take place in the Thompson Room of the Barker Center from 2 to 5 p.m., and will be followed immediately by a reception in the Rudenstine Gallery.

“We hope that Rembrandt and the other remarkable artists on view will draw a new audience in to visit the Rudenstine Gallery, in addition to our usual guests,” said Gates. “We are proud of our singular gallery and are mindful of its special role in educating the public about art by and about people of African descent.”

“Africans in Black & White” will be on view at the Rudenstine Gallery from Sept. 2 to Dec. 3. For more information, visit the institute’s website.