A new program to shake up education 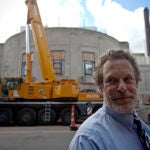 The irony of her name was never lost on Tracy Money. Growing up in poverty, the Minnesota native collected and cashed in empty cans on weekends so she could afford to eat lunch during the week.

Fortunately, she discovered early on that learning didn’t cost a thing.

Money’s parents never attended college but valued education, she said, and “They wanted something different for us.”

A bright student who loved to read, Money found school uninspiring and started skipping class in the second grade. Years later, with no plans for college, she took the SATs on a whim. She managed top scores that landed her in an honors program at Eastern Washington University.

“It was the first time in my life that I loved school,” said Money, who chose to major in elementary education. “It felt like home.” Later, she said, “I kept coming back to education. I wanted to fix it.”

Now she can. Money is one of 25 doctoral students in the new Doctor of Education Leadership (Ed.L.D.) program at the Harvard Graduate School of Education (HGSE).

Money, who founded a small high school in 2007 in Kennewick, Wash., hopes to use her experience at Harvard to expand her model: a rigorous, integrated curriculum that incorporates students’ interests with personal, customized learning plans.

The program is multidisciplinary, involving faculty from HGSE, Harvard Business School (HBS), and the Harvard Kennedy School (HKS). It incorporates training in education, management, and leadership, as well as politics and policy.

The first year centers on a core curriculum. In the second year, participants will customize their course work to fit their individual interests and leadership focus. In the third year, students will perform “residencies” with partnering organizations such as school districts and nonprofits. While there, they develop and implement initiatives aimed at educational reform.

There were more than 1,000 applicants for the new degree program after it was announced in September last year. The large number caught organizers off guard. “We were hoping we would get 250 applications,” said Elizabeth A. City, the program’s executive director.

Last spring, 56 finalists visited HGSE for an intensive day of interviews. City called the final cohort of 25 a diverse and impressive pool, bringing with them a wealth of leadership experience ranging from six to 26 years. The vast majority have prior graduate degrees, and more than half are students of color. The group includes principals and teachers, consultants, directors, and managers.

The true value of education hit home for doctoral student Susan Cheng during her first job after college, when she learned that “education really is a civil rights issue.”

She has a master’s degree from HKS, experience with a nonprofit in California, volunteered with Partners In Health in Rwanda, and worked under the direction of Michelle Rhee, the dynamic chancellor of the District of Columbia public schools system.

Cheng, whose work included recruiting and hiring managers and directors for Rhee’s administration, said working for such a fearless change agent inspired her to apply to the Harvard program.

“What I learned from her was to stand up for what’s right.”

The goal of her Harvard years, said Cheng, is to learn how to “sustain real reform over time.”

“Part of the solution is in the model of this program,” said Cheng. “It’s going to take working in teams, forming alliances and coalitions of support that are nontraditional … to devise solutions.”

Doctoral student Anthony Jewett, the child of two teenagers who was raised mostly by his grandmothers in a Florida housing project, came to the new program by way of Teach for America and a national nonprofit he founded to help students study abroad.

American public education today is broken, said Jewett, and it can only be righted by “dogged commitment to nothing else than the well-being of kids.”

He believes that fixing the nation’s public education system requires a multifaceted approach. He had plans in place to earn a doctorate in education, a master’s in public policy, and an M.B.A. Then he heard about the HGSE degree.

“A tuition-free doctorate at Harvard among these three schools? I thought ‘no way.’ ”

The students have been on campus since Aug. 23. Their orientation included an introduction to the library system, a narrative workshop with HKS lecturer in public policy Marshall Ganz, diversity exercises, and — above all — the chance to bond over their shared mission.

“Already, there’s this sense that we are a single community,” said Robert B. Schwartz, a HGSE professor of practice who helped to develop the program, “that this is an adventure that we are all embarking on together.”