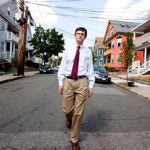 “My mother … told me at age 10, ‘If you’re going to die, you’re going to die. There’s no sense worrying about it,’” historian and author Alice George said Wednesday (Aug. 11), recalling a personal moment to highlight a discussion of world history.

George was talking about her experiences in October 1962, when for two weeks the world stood on the brink of nuclear annihilation. The United States and the Soviet Union faced off over Soviet nuclear missiles in Cuba, prompting a U.S. blockade and raising the specter of a full nuclear missile strike that projections estimated would kill 145 million of the nation’s 185 million people.

Though the threat of nuclear war remains, the sense of living just minutes from disaster has retreated with the end of the Cold War and the rise of today’s replacement threats of terrorism, environmental calamity, and financial collapse. But for many Americans who lived through the Cuban Missile Crisis, that episode remains a key, frightening memory, one that George compared with the terrorist attacks of 9/11 in the psychological toll it took on the nation.

George was one of several speakers at a three-day workshop for secondary school teachers concerning the Cuban Missile Crisis. Sponsored by the David Rockefeller Center for Latin American Studies and the Davis Center for Russian and Eurasian Studies, the workshop aimed to give its dozen or so participants an in-depth understanding of the crisis, including not just the official U.S. government perspective, which is taught in schools, but also that of ordinary Americans, as highlighted by George, and the perspectives of Russians and Cubans, who were as enmeshed in the crisis as Americans were.

“You can’t understand history by just understanding U.S. history,” said Cris Martin, outreach director for the Davis Center and one of the event’s organizers. “I hope when we have people teaching U.S. history classes, they will say to students: ‘How do you think it felt to be a Soviet citizen? How about a Cuban citizen [after the crisis], under threat from the United States with no support from the USSR?’”

The workshop included remarks by Charles Maier, Harvard’s Leverett Saltonstall Professor of History, who gave an overview of the Cold War; American University professor Philip Brenner, who spoke about Cuba’s perspective on the crisis; Amherst College professor William Taubman, who described the Soviet perspective; and Tufts University professor Alan Henrikson, who spoke about U.S. foreign policy in the crisis.

The workshop also included a discussion of using primary sources, along with a day of work on digital technology, such as blogging and social media, that can be used in the classroom. Martin said she hopes participants left not just with a new understanding of the crisis, but with hands-on learning they can use immediately in class.

Ryan Quinn, a U.S. history teacher from Masconomet Regional High School in Topsfield, gave the program high marks, saying the workshop exposed him to scholars and research that deepened his understanding of the crisis in a way he could not manage to learn during the school year, when he has to keep the class moving to cover all the material in the curriculum.

“This gives me even deeper insight into U.S. foreign policy in the early 1960s that I can share with students,” Quinn said.

David Walsh, who teaches world history at Masconomet, said he attended past outreach programs, including last year’s collaboration of the Davis Center, the Rockefeller Center, and the Center for Middle Eastern Studies on oil. He said he appreciates not only the programs’ information and quality, but also that Harvard is reaching out to the community. Walsh and Quinn said it was instructive to them not only to understand the material presented, but also to get a glimpse of how the professors and researchers who spoke conduct their own research and organize their thoughts.

Amyra O’Connell, a Weymouth middle school Spanish teacher, said that in teaching the language she is also seeking to get students to understand people and cultures in other parts of the world. O’Connell, who is from Ecuador, said her students grew up in one town and that town is still their whole world. She said that insularity won’t last because the world they’ll be adults in is shrinking fast.

“A lot of my students are just regular kids. They live in Weymouth; it’s their whole world,” O’Connell said. “I try to open up their minds a bit.”