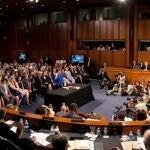 Child welfare experts from around the country gathered at the Harvard Kennedy School Thursday (Aug. 5) to share experiences from successful programs, in hopes of helping the thousands of impoverished, fragmented families in which a significant portion of the next generation is growing up.

Two out of five American children are born to unwed mothers, and one in five grows up in poverty, according to Julie Wilson, director of the Malcolm Wiener Center for Social Policy, who introduced the policy forum, “Improving Child Well-Being: What Cities Can Do.” The forum was sponsored by the Wiener Center and Harvard’s Ash Center for Democratic Governance and Innovation.

Life in these fractured families is complex, often marked by temporary relationships that can lead to a lack of trust, Wilson said. By the time they are 5 years old, a third of children in families headed by a single mother will have seen her have relationships with three or more men, while children of single fathers will have seen five or six relationships, some resulting in the family expanding with half-siblings.

The event, which was focused on local solutions, included government and nonprofit organizations from Louisville, Ky.; Portland, Maine; Kansas City, Mo.; Hampton, Va.; the Choctaw Nation in Oklahoma; Milwaukee County; New York City; and Ithaca, N.Y. Included were several organizations that had been winners of the Ash Center’s Innovations in American Government Award.

Panelists said that the conditions plaguing families, such as poverty, divorce, and teenage pregnancy, stem from complex sources, making it impossible for a single agency or organization to provide solutions. The complexity means networks of providers and communication among those providers are essential to match a child’s or family’s needs with services that can help.

Roberta Lipsman, of Community Partnerships for Protecting Children in Portland, said her organization’s goal is to support children and families so the children stay out of state care. Her organization has a family-centered focus but doesn’t provide the care itself, instead linking families to existing community resources.

“I am not a program. I don’t carry cases. I am a way of working. I am a modality. I get people working together,” Lipsman said. “The core of what we’re trying to do is keep kids out of [state] care.”

Cassandra Miller, of the Louisville Metro Department of Housing and Family Services, described a program called Neighborhood Place that provides a community-based, one-stop resource for families. With eight sites across Jefferson County, Neighborhood Place uses area schools as familiar, accessible locations and has offices inside schools or on their grounds. The organization offers a single intake and assessment process and has grown rapidly, from eight staff members in 1993 to 400 now.

Schondelmeyer said the school focus is particularly useful because of the increasing “suburbanization of poverty” where “there’s not the structure, but the schools are there.”