I’ll get mine, Jack 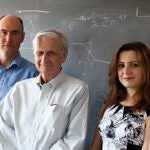 The ties that bind

Applying employment contract theory to symbiosis, a new paper suggests that the mutually beneficial relationships that species create are maintained because of simple self-interest, with partners benefiting from healthy hosts, much as employees benefit from robust employers.

The new work would discount the theory that host species have evolved to promote symbiosis, the close and helpful interaction of species, by promising rewards or threatening punishment.

“Cooperation between species, known as ‘mutualism,’ is remarkably commonplace in nature, but the evolutionary origins of such partnerships remain murky,” said Naomi E. Pierce, the Sidney A. and John H. Hessel Professor of Biology at Harvard. “Since symbiotic host species essentially ‘employ’ their symbionts, it occurred to us that economic theories explaining how and why employers reward or punish their workers might give us deeper insights into symbiosis. This approach reveals that punishment is far from ubiquitous in nature.”

Most mutualism involves species, such as plants, that host smaller symbionts, such as bacteria or insects. Studies have observed that hosts can selectively reward cooperative symbionts and punish cheaters, such as when soybean plants direct food and oxygen only to root nodules colonized by nitrogen-fixing bacteria, and kill off nodules with unhelpful bacteria. But it has remained unclear how such symbioses evolved.

“The prevailing consensus, known as ‘host sanction’ theory, has been that host species have evolved to punish cheaters and to reward cooperators,” said Megan Frederickson, assistant professor of ecology and evolutionary biology at the University of Toronto. “However, an alternative explanation known as ‘partner fidelity feedback’ holds that instead of hosts evolving to punish and reward, symbionts have evolved to help their hosts, because a healthy host automatically feeds back benefits to the symbionts. A cheating symbiont would seem to be treated like any other environmental setback, such as infertile soil, and a mutualistic symbiont elicits the same sort of investments that are triggered by the availability of new resources, like a patch of sunlight.”

The researchers said their application of economic theory supports the latter explanation. Lead author E. Glen Weyl, an economist, used employment contract theory to design two tests to probe the evolution of mutualism. The team found that published data from two well-known pairs of symbiotic species better supported the view that symbionts have evolved to help their hosts rather than the hosts evolving to monitor and manage their symbionts.

“We proved the host sanction theory wrong by trying to prove it right,” said Weyl, a junior fellow in Harvard’s Society of Fellows. “Every time I created a model, it was in-consistent with the natural biological predictions and with the available evidence. The great virtue of economic theory is not exactly that it is so often right, but that its precision allows it to be easily falsified when it is not.”

The analysis by Weyl and his colleagues showed that in two classic mutualisms where host sanctions were thought to prevent cheating — one between a legume and a soil bacterium, and the other between a yucca and a moth — the evidence is actually more consistent with the competing theory of partner fidelity feedback.

“The mathematical tools in economic contract theory and mutualisms make quite a natural pairing, but in a way we hadn’t anticipated,” said Douglas W. Yu, lecturer in biological sciences at the University of East Anglia. “Rather than just confirming expectations, the theory let us design powerful tests to choose between hypotheses. It’s always tempting to start with the assumption that an interesting behavior, such as punishment, is the product of specific adaptations, but Glen’s model forcefully reminds us that there is already a lot of biology out there, which natural selection makes use of.”

The work was funded by the National Science Foundation, the European Science Foundation/European Collaborative Research’s joint program on the Evolution of Cooperation and Training (TECT), and the Harvard Society of Fellows.