Getting down to cases 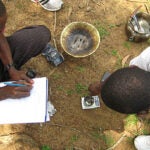 Harvard is a place of high academic realms, where scholars tackle complex issues that would confound many observers.

For instance, Emil Aamar is a fellow at Harvard Medical School who studies molecular genetics in zebrafish. Diane Truong, a graduate student in chemistry, investigates evolution on a molecular scale. Yiqiao Tang, finishing a third year of doctoral work in physics, works in a lab that takes images of single molecules, and traps nanoscale objects in solution.

But hold those deep thoughts.

Aamar, Truong, and Tang — all strangers to one another two weeks ago — recently took a break from their brainy disciplines. From July 20 to 30, they were among 58 Harvard graduate students and fellows who took part in a “case competition” co-sponsored by the Harvard Graduate Consulting Club. Their mission: Learn to think, act, and present like consultants.

Consultants are the outside experts whom businesses hire — at handsome fees — to explore key problems. They are a major pillar in a world driven by dollars and cents and data. They also can be models of how to work fast, hard, and in well-tuned teams to present results on a deadline.

“I’m a freshman at this,” said Tang, a member of Harvard Team 1 with Aamar and Truong. Consulting is new to him, but he’s eager to explore it as a way to market his expertise someday.

Filling out Harvard Team 1’s roster was Kartik Balachandran, a postdoctoral fellow at the Harvard School of Engineering and Applied Sciences. He studies tissue engineering for cardiac muscles.

During the competition, teams from Harvard and the Massachusetts Institute of Technology (MIT) were given a business “case” — a problem — to solve. They had 10 days to investigate data, conduct interviews, arrive at solutions, and summarize their findings in brisk presentations.

The 58 competitors from Harvard represented many disciplines, including chemistry, physics, engineering, medicine, public health, and government. Five were from the Harvard Extension School, 19 were Ph.D. students, 21 were postdoctoral fellows, and one was a Harvard instructor. Competition wrapped up with a daylong slam of team presentations in front of a dozen consultants, who threw back praise, criticism, and hard questions. In the spotlight were 12 teams from Harvard and eight from MIT.

Tang was not bothered by the results. After all, his team was one of the competition’s five finalists. And, more important, all had learned something. He said that consulting skills — how to research, how to make quick decisions, how to work fast — transfer to every discipline.

Then there was a lesson in the power of teamwork, said Truong — which is not always the way researchers operate. She and her teammates spent up to three hours a day preparing for a 10-minute presentation.

The competition is “the perfect forum” for young experts who are curious about consulting but know little about it, said Prashant Raghavan, the co-president of the Harvard consulting club, which has 400 active members and offers a popular “mini-MBA.”

“Consultants are problem solvers,” said Raghavan, a postdoctoral fellow at Harvard Medical School. His own interests are proof of the club’s non-business origins: He studies stem cell regulation in roundworms.

Shelby Clark, M.B.A. ’10, agreed on the value of consultants. Of his own company, he said, “It’s hard for us to pull back and ask the important questions sometimes.” Clark is CEO and founder of RelayRides, a Cambridge transportation startup launched this summer. The company provided the competition’s case: What is the best way for this fledgling operation to expand?

RelayRides bills itself as “the world’s first person-to-person car-sharing community,” an eco-friendly, cheaper answer to Zipcar. The idea is that motorists are paid to let screened drivers use their cars, which otherwise sit idle in driveways and garages. Borrowers pay no annual fee, get low hourly rates, and are shielded by a company-supplied insurance program.

The RelayRides expansion puzzle was presented on the first day of the case competition, when novice consultants from both schools gathered in Harvard’s Tsai Auditorium to meet their teammates.

They got a primer in consulting, too. Among the lessons: Think as a team starting on the first day, since teamwork is the engine of fast action. Pick a group leader. Develop messages that are coherent, direct, and concise. Make presentations crisp and creative. Get research where you can, including from experts.

“Consulting is a people business,” said Harvard biochemist Ethan Karp, who helped deliver the first-day primer. He’s the onetime president of the graduate consulting club and founder of the Harvard Volunteer Consulting Group. He will soon join McKinsey & Co.

Rezek agreed, calling consultants “a big value” who multiply expertise. He imagined a business that just hired consultants. “They’re hiring four people,” said Rezek, “but they’re getting 16,000 people from around the world.”

Said a hopeful Aamar, speaking for the young experts of the future: “We are looking for such positions.”