A higher profile for African studies 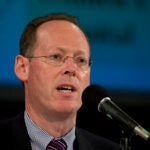 The U.S. Department of Education has named the University Committee on African Studies as a National Resource Center, thereby raising the profile of Harvard’s Africa programs and bringing in grant money for programs, student travel, and outreach.

Committee chair Caroline Elkins, professor of history, announced the designation in a recent letter to colleagues. The committee will receive nearly $2.5 million over the next four years.

The National Resource Center program supports institutions that function as centers for teaching foreign languages, with an emphasis on understanding not just the languages themselves, but on providing a full understanding of the countries or regions where the languages are spoken.

At Harvard, the work of about 100 faculty members across several schools and disciplines involves Africa in some way, Elkins said, from public health to Swahili. About 300 courses a year touch on subjects related to Africa, 31 African languages are taught at Harvard, and 50 African scholars work at the University each year in fellowships. In addition, Africa is not just a continent studied from afar. Students regularly travel there to conduct studies firsthand. This summer alone, about 150 students are working and researching in Africa.

“It is a reflection of how well we do African Studies at Harvard,” Elkins said.

As much as the University already offers in study and research on African countries, people and languages, Elkins said students are quite advanced.

“The demand from the students, we just can’t keep up with it,” Elkins said. “Students are way ahead of us.”

In her letter announcing the designation, Elkins thanked “Harvard’s Africanist faculty and staff” for their dedication to teaching and research. Elkins also thanked President Drew Faust, Provost Steve Hyman, Dean of the Faculty of Arts and Sciences Michael Smith, and Dean of Social Science Stephen Kosslyn for internal support that led to the award.