A glimpse of lost language 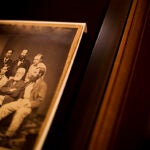 A life of transition

In the early 1600s in northern Peru, a curious Spaniard jotted down some notes on the back of a letter. Four hundred years later, archaeologists dug up and studied the paper, revealing what appear to be the first traces of a lost language.

“It’s a little piece of paper with a big story to tell,” said Jeffrey Quilter, who has conducted investigations in Peru for more than three decades.

Quilter is deputy director for curatorial affairs at Harvard’s Peabody Museum of Archaeology and Ethnology, as well as director of the archaeological project at Magdalena de Cao Viejo in the El Brujo Archaeological Complex, where the paper was excavated two years ago.

The writing is a set of translations from Spanish names of numbers (uno, dos, and tres) and Arabic numerals (4–10, 21, 30, 100, and 200) into the unknown language. Some of the translated numbers have never been seen before, while others may have been borrowed from Quechua or a related local language. Quechua is still spoken today in Peru, but in the early 17th century many other languages were spoken in the region, such as Quingnam and Pescadora.

Information about them today is limited. Even so, the archaeologists were able to deduce that speakers of the lost language used a decimal system like our own.

Quilter said that this simple list offers “a glimpse of the peoples of ancient and early colonial Peru who spoke a language lost to us until this discovery.”

“The find is significant because it offers the first glimpse of a previously unknown language and number system,” said Quilter. “It also points to the great diversity of Peru’s cultural heritage in the early colonial period. The interactions between natives and Spanish were far more complex than previously thought.”

The name of the lost language is still a mystery. The American-Peruvian research team was able to determine it was not Mochica, spoken on the north coast into the colonial period but now extinct, and pointed to Quingnam and Pescadora as possible candidates. Neither Quingnam nor Pescadora, however, have been documented beyond their names. There is even a possibility that Quingnam and Pescadora are the same language but they were identified as separate tongues in early colonial Spanish writings, so a definitive connection has not yet been established.

The research is detailed in the Aug. 23 edition of American Anthropologist. To read the article, “Traces of a Lost Language and Number System Discovered on the North Coast of Peru.”