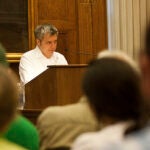 The little book that could

Sixteen of us got lucky last fall. We were in Paul Harding’s last creative writing class at Harvard. Then he won the 2010 Pulitzer Prize in fiction. Our luck was that we flew with an ace while he was still slipping under the radar of fame.

For seven years, Paul taught freshman composition in the Harvard College Writing Program. He also taught at the Harvard Summer School, and until seven months ago, taught fiction workshops at the Harvard Extension School. So his July 27 reading back on campus was a sort of homecoming.

Jane Rosenzweig, who did the introductions, was a student with Paul at the Iowa Writers’ Workshop and is now director of the Harvard Writing Center. Fifteen years ago the two of them attended a fiction workshop in a Middletown, Mass., barn. “Now I’m not so special,” Rosenzweig said of her pre-fame friendship. “I’m one of many fans of Paul’s work.”

A few veterans of his final Extension School class sat in the audience. There was the elegant Dutchman (good dialogue), the burly Gen-Y guy (good landscape), and the onetime sketch comic (good characters), who was into zombies and video games. In the first class, the zombie fan said about his writing aspirations: “There’s no diving in this pool. There’s no deep end.” Not to worry, said Paul, who all semester acknowledged — but did not lament — the divide between genre and more literary writing. “One of the pleasures of genre is you know what’s going to happen.”

Paul’s last Harvard students were curious to see what renown had done to the man who would appear in that Sever Hall classroom unshaven and in a ball cap, whose laptop always gleamed in front of him, as if he had just stood up from his writing desk.

Paul engaged student work with his dual gifts: a kind heart tempered by a stern head. He had fallen off the horse on his road to literary Iowa, had seen the light, and wanted us to see the light of good writing with him. We found out that Paul has not changed much, though he made a show of wearing pressed slacks. He still had the deep voice, and he still had the delivery that allows students to hear him think out loud. There is rumbling and humming as the engine starts up, then the well-tuned writer’s concision kicks in.

Paul’s teaching style is aphoristic. Once the wheels are turning, they turn exceeding fine. The results are quotable bursts of wisdom on the art of writing.

Is there a Gospel of Paul waiting to be compiled for eager student writers? If so, here is a start, gleaned from the workshop last fall:

— “I don’t care if that really happened. I care that it happened in the book.”

— “Literary fiction is true. All the stories I write are true. They’re just not factual.”

—  Plagiarism “doesn’t include the anxiety of imitation.”

—  “Every good story is experimental.” Fiction “works from character outward.”

—  On literary models: “We all derive our authority from someplace else.”

—  On one of his literary models: “Cheever is my binky.”

—  On going beyond literary models: Writing is a process of “cultivating the authority of your own vision.”

—  Good writing needs “the mechanical plausibility of the world.”

—  “All the meaning of the story lives in the present moment.”

—  On talent: “Like health, you can’t just hang out with a physician.”

—  “You never want to do it because it’s stylistically nifty.”

—  What to aim for: “The thing itself, rather than the telling of it.”

— “I’m willing to believe anything if it’s precise and sure-footed.”

—  On concrete details: “You have to put your character in the world’s way.”

—  On respect for the reader: “The most annoying question in the world: What is this about?”

—  “Just say it. Be straightforward.”

—   On narrative pace: “Slow down, and show how it happens.”

—  “I try never to write with metaphor or symbol. I just have things mean what they are.”

To read about Paul Harding’s remarks that evening, click here.