The little book that could 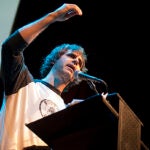 Oberon is so on

There’s no trace of bravado in Paul Harding, no austere aura of the revered and seasoned writer.

He knows hard work like the characters in his novel “Tinkers,” men of solitude with unspoken troubles.

Harding once reconciled with himself that maybe he’d be a writer who never published. He’d sent his book around to agents, but none was impressed by a labyrinthine story interweaving three generations of New England fathers and sons. Agents told him readers weren’t interested in “my quiet, meditative half-novel thingie,” but wanted action and fireworks — car chase and machine-gun style.

“I think of ‘Tinkers’ as unlineated poetry,” Harding told an overcapacity crowd at the Barker Center Thursday night (July 29). The former creative writing and composition professor at Harvard Extension School and the Harvard Summer School drew packs of admirers and former students who wanted to hear, and perhaps brag about, their former teacher who won the Pulitzer Prize — seemingly out of nowhere.

“I ceased and desisted and put the book in a drawer for three years,” Harding revealed.

He had a wife, two children, and used to drum in a rock band. He had a full, good life, he knew, but he just couldn’t let go of his novel. One of his sons suffered with chronic ear infections and would only sleep if being driven around. So in the middle of the night, Harding drove, and when his son finally dozed, he’d pull over and work on his story.

“Tinkers” is drawn from Harding’s family history. His grandfather repaired and traded antique clocks, and while Harding apprenticed with him, he heard fragments of the man’s life. The not-quite 200-page novel narrates the death of clock repairer George Washington Crosby, goes back in time to introduce George’s father, the epileptic tinker and backwoods peddler Howard, who then remembers his own epileptic father, who abandons the family when he learns his wife is to have him institutionalized.

“I’m not interested in autobiography, but the dramatic premises of the book are factual,” Harding said. “My grandfather did repair and trade antique clocks, and I apprenticed with him. His father did have epilepsy and left the family when my grandfather was 12.”

“My grandfather’s family had been very poor, and his father’s leaving was very traumatic, so my grandfather would not talk about these things. He refused to elaborate. So that just made those stories irresistible to me. So when he died and my grandmother died, and all my documentary sources dried up, I just took those stories as points of departure and would write my way out from them until the imagined truth would hit its own momentum.”

The novel’s fragmentation, rich detail, and many perspectives are what make “Tinkers” so singular — and arguably convoluted. But Harding said the original version of his book was nearly indecipherable.

“The way I write is the way those robot cleaners vacuum,” Harding told the audience. “Fiction doesn’t come to me in linear chronology.” He recalled the night he printed his manuscript, “spread it out on the floor, took scissors and tape, and cut it all up.”

But his manual labor paid off.

“Tinkers” found its way to Erika Goldman, the editorial director of Bellevue Literary Press, a small nonprofit run out of the New York University School of Medicine. Goldman agreed to publish it.

From there, Harding’s success is nothing less than a Cinderella story. “Tinkers” spread largely through word of mouth, with a few good reviews along the way, and garnered the unlikely attention of the Pulitzer judges.

“I still don’t believe it’s possible,” Harding said of his award. “Is it an elaborate hoax?”

While working on a second novel, Harding is on the road promoting “Tinkers” until next April. After all the rejection, Harding is warming to his newfound limelight.

To read reflections from a student (and a veteran reporter) on what it was like to learn from Paul Harding, click here.