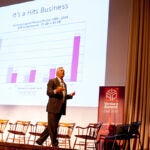 Meeting in the middle

They are talented, driven, dedicated, and largely underrepresented in corporate America.

Many are the first in their families to go to college, some come from single-parent households, others are thousands of miles from their homelands. For some, English is not their first language. Together they represent the changing face of the traditional executive in the United States.

The business stars of tomorrow were at Harvard Business School (HBS) last month exploring what many hope is the next stop on the road to a business career through the help of a weeklong summer program that lets them try on the role of an HBS M.B.A. candidate.

Launched in 1983, the HBS Summer Venture in Management Program (SVMP) is a management-training program for rising college seniors designed to increase diversity and opportunity in business education. Students are nominated for the program by sponsoring organizations where they have secured summer internships. Those recommendations, as well as the students’ academic records, leadership ability, and personal characteristics, are all factored into the admissions process.

Associate Director of M.B.A. Admissions Pauline Jennett, who helps oversee the program, explained, “Through SVMP, HBS has long been a leader in introducing talented students from a wide range of backgrounds to a business school environment. Our goal is to broaden their range of experience. As a result, they may add an option to their future plans — applying to business school here or elsewhere.”

Tradell Hawkins, who recently completed his junior year at Michigan State, where he majors in social relations and policy with a business minor, smiled broadly as he captured shots of the verdant HBS campus on his HD recorder and camera. A product of the high-tech-savvy generation, Hawkins, who loves to network on Facebook and Twitter, hopes to work with a company that uses social media to market to consumers.

After only one day of exposure to case studies, the Business School’s famed method of instruction, the young Chicago native was in awe. Previously unfamiliar with the interactive classroom format, Hawkins was reeling from the heady discussions examining corporate giants like Coca-Cola and Ikea, and the close interaction he had in class with HBS professors.

“It was great to read those cases and experience the thought process. I hadn’t thought about [those companies’] brand management styles and contracts with different suppliers,” he said, adding, “the professors are so passionate, and they are so knowledgeable about everything — it really inspires you.”

When the program was over, Hawkins said his SVMP experience had both solidified his decision to work in the corporate world and expanded his outlook on a business career.

“It allowed me to think beyond moving up the corporate ladder in a Fortune 500 company, to consider more broadly the contribution I want to make in the world. The cases reminded me of the impact business decisions can have on developing countries and individual human lives, which inspired me to think more in depth about what kind of company I want to work for.”

Asked if he hopes to attend HBS, he replied simply, “Yes, indeed.”

From Puerto Rico, Cerlienne Menéndez Mendoza cried uncontrollably when she received the e-mail confirming her acceptance to the program. She said she thought she was dreaming as she walked through the School’s impressive Baker Library/Bloomberg Center on a sunny summer afternoon.

“I still can’t believe I am here; I am in shock. I am still waiting to get an e-mail saying it was all a joke.”

But she was well aware that the demanding schedule is no laughing matter.

For five days students take part in intense interactive, debate-and-dialogue classes where arriving unprepared and unfamiliar with the day’s material is not an option. They explore actual business dilemmas and take on the role of executives dealing with critical decisions.

When not in class, they spend their time reading cases and participating in small study groups to prepare for the fast-paced discussions, acting every bit the part of an actual M.B.A. candidate with a full load of HBS cases to read during the week.

The challenging pace came with big payoffs for Mendoza, who has dreams of starting a nonprofit that will help underserved children finish high school and prepare for college.

A junior at Assumption College, where she is pursuing a triple major in accounting, political science, and Latin American studies, Mendoza attended the SVMP program to determine if applying to HBS would be a good option for her post-college. After completing the intense SVMP week at HBS, she had her answer. She will begin the application process this fall.

Calling the experience “life-changing,” Mendoza said the HBS program, with its varied cases on topics like China, basketball superstar LeBron James, and the Chad-Cameroon oil pipeline, helped her consider other career sectors and to hone her critical thinking skills.

Additionally, Mendoza, like many of the program’s participants, said the chance to network with such an ambitious and intelligent group of peers was a vital part of the program.

“We all worked together … to get the best out of this experience. In the process we have made friendships that I know will last us a lifetime.”

Aleksey Chernobelskiy came to the United States from Russia with his parents, who were hoping for a better life for their two young sons. They moved, he said, “to be part of the American dream.”

Teased as a boy for his poor English skills, the Moscow native was determined to prove his tormentors wrong and make it to the very top.

Last month he did — by winning a spot in the weeklong program at HBS, where he studied cases in the same way business students do.

With a double major in finance and accounting and a minor in math and economics at the University of Arizona’s Eller College of Management, Chernobelskiy arrived at HBS interested in a slightly different track from most of his counterparts. Instead of working in corporate America, he hopes to teach future executives about finance, at HBS, to be exact.

“I really wanted to experience the teaching style at Harvard Business School, which was really important to me. To say that I was impressed is an understatement,” he said early in the week, adding, “This was literally my biggest dream. … I can’t even sleep at night.”

At the conclusion of the program, Chernobelskiy said the experience had confirmed his lifelong desire to pursue an advanced degree at the School.

“Harvard Business School,” he said, “is my number one choice.”