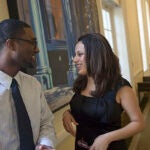 The Chinese have an expression for what you get by studying overseas: du jing, or “a glaze of gold.”

“You paint a gold layer on yourself,” said Hong Kong University social scientist David Zweig, who lectured at Harvard this week (July 19). Returning home to China, he said, means you have a leg up on a good job and fast promotions.

Zweig, a onetime fellow at Harvard’s Fairbank Center for Chinese Studies, was in Cambridge to offer a glimpse of his book-in-progress on China’s gold-layered returnees.

Why do they come back, and what role does the Chinese government play in getting them back?

The short answers: They come back to make money, but not to change China’s politics.

And the government is doing more than ever to get returnees back — but they would come back on their own anyway.

The real answers are more complicated, and involve the complex interactions of many people, said Zweig: government officials, students, scholars, entrepreneurs, and families.

Returnees bring ideas and energy back to China, but they bring home problems too, he said. For one, Chinese who earned less prestigious domestic degrees are resentful of the preferential treatment returnees get.

But the earliest problem with returnees was that there were so few. In the two decades after 1978, barely a third of Chinese students who went overseas came back. Among students who paid their own way, the rate of return was 3 percent, said Zweig.

This weak return rate weakened even more after 1989, when the Tiananmen Square incident scared off more returnees — and even triggered a government search for “class enemies” among students abroad.

But by the mid-1990s, attitudes had changed and patient China took the long view. Most of its leadership came to see brain drain as a means of “storing brainpower overseas,” said Zweig. Today, they see it as “brain circulation,” he said — an investment that will eventually pay China back.

The signs of payback are there already. Since 2000, the number of returnees has boomed upward. Political change is not the reason, he said, since there has not been much. Instead, Chinese come back because they see liberalized capital markets and an acceptance of private property.

In short, said Zweig, returnees “can make a buck.”

Since 1978, about 1.3 million Chinese students and scholars have gone abroad to study — most of them to Japan, the United States, Great Britain, Australia, and Canada.

The earliest going overseas were hardcore elements dedicated to the Communist ideal. “They never thought about not going back,” said Zweig.

Today, Chinese go abroad with a strategy in mind: Search for what is in short supply at home, then bring it back.

Returnees are called hai gui, or “sea turtles,” said Zweig, named after the creatures who are born on shore, travel at sea, then instinctively return home.

Other returnees — hai ou — increasingly keep ties to the West, and even maintain businesses and residences there. They are “seagulls,” he said, who fly back and forth over the sea.

Returnees may be glazed in gold, but coming back to China has its bumps, said Zweig. For one, many Chinese come home with expectation of getting jobs immediately. When they don’t, they form a demographic clog that earned another sea analogy: hai dai, or “seaweed.”

Academics go abroad to get “good platforms” for advancement upon their return, said Zweig, but then they often refuse to write for domestic academic journals.

Some scientists return, attracted by China’s “Hundred Talents” program and other incentives, but then they burden systems already top-heavy with full professors, he added.

Entrepreneurs are attracted to the idea that even ordinary Western technology can lead to profit in China. And they like the idea of China’s high-tech, low-tax enterprise zones. (Zweig called them “one-stop chopping” zones — that is, places where paperwork — “chop” — is reduced.)

Then again, entrepreneurs are also disappointed at the lack of start-up capital in China, and their homeland’s weak protections for intellectual property.

Some master’s degree students abroad come home and are jobless “seaweed” for up to a year, said Zweig. But worse, they may be the victims of diploma mills and third-rate universities — especially in Great Britain.

Master’s students may also come home with few economic advantages. They will make $200 a month more than those who stayed in China, he said, but their families take on $20,000 or more in debt for one year of overseas study.

There are other burdens on families, who may only rarely see their children again, said Helen Ji Li, a China-born independent researcher. Many of the students are only children like herself, she said. “It is kind of sad. Once you’ve left, the parents have no other children in China.”

Zweig acknowledged the great financial sacrifice families make. But in households with more than one child, he said, study abroad is also “a diversification of risk and opportunity.”

One fact emerging from the data, said Zweig, is that returnees always argue for more openness in China, but they remain indifferent about political action.

Still, he said, their influence will be felt politically one day.

After all, the biggest benefit of returnees may be the worldliness and cultural diversity they bring, said Zweig. “They’re greatly increasing China’s international flavor.”