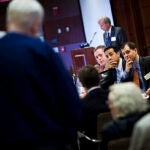 The mystique of merit pay

Retired diplomat Nicholas Platt ’57, U.S. ambassador to three countries and president emeritus of the Asia Society, was one of the wise men whom President Richard Nixon called his “China boys” — staffers who smoothed the way to opening relations with China four decades ago.

Platt led a recent lunchtime seminar last Friday (June 4) called “China Then and Now,” sponsored by Harvard’s Fairbank Center for Chinese Studies. A small room in the Center for Government and International Studies-South was jammed with a standing-room-only crowd, and some onlookers peered into the open door.

Part of the draw might have been the home movies that Platt took during 1972 and 1973, just after China opened its doors to the West for the first time since 1949. The movies show “what China was like when we all started out there, at a time that for many of us was quite magic,” said Platt, who later served as ambassador to the Philippines, Zambia, and Pakistan. “It was the other side of the moon for us.”

Those early views included what he called the first new glimpses into the private lives of the Chinese under Mao’s rule. “We hadn’t seen what was going on in people’s backyards,” said Platt, who took film from his hotel window in Beijing: a woman hanging wash, and another brushing her teeth in an alleyway. “For us, everything was really interesting.”

His movies show began with the arrival of Air Force One, a Chinese honor guard standing at attention on a frigid February morning in 1972, and Nixon’s first greeting of Zhou Enlai, the first premier of the People’s Republic of China. He had been famously insulted at the 1954 Geneva Conference by U.S. Secretary of State John Foster Dulles, a Cold Warrior who refused to shake his hand.

Said the amiable diplomat of his movies, “It’s a worms-eye view, and I’m the worm.”

That view from the bottom shows a 1970s China far different from the modern version. The movies — jittery and in faded color — showed Beijing under a pall of smoke from ubiquitous charcoal fires and from factories built with Soviet aid.

There were views of the Great Wall empty of tourists, a shabby but grand Forbidden City, the nearly deserted Ming tombs (where the Platt family — diplomat, three sons, and wife Sheila — would picnic), the bare Western Hills outside Beijing (which offered views of countryside now filled in by ring roads and buildings), and amateur political festivals dominated by stage gymnasts (in contrast, he said, to today’s “huge, very well rehearsed, perfectly synchronized big marching shows”).

In those days, transport in urban China was still a matter of heaping, two-wheeled carts pulled by skinny men, along with donkey carts and rivers of bicycles — 2 million registered in Beijing alone in 1973.

“On bikes, people were … out of the purview of public security, and they would come up and chat,” said Platt, who was eager to circumvent China’s strictures on contact with foreigners. “So, as a result, we were the first and only diplomatic office in the history of the United States that had regular bicycling hours. … It eased our sense of isolation.”

Later, Platt and his family followed visiting U.S. athletes around, getting more views of life in China, though they were “carefully chosen ordinary life.” The movies show rice farmers, villagers crowded along canals, the school where Mao once taught (“Even the spittoons are well preserved,” said Platt), and a Shanghai commune that made bricks. “They sped up their work rate when we came near,” he said.

The athletes and the Platt family, exotic Westerners all, drew crowds wherever they went. “All it took to get a crowd was to stop,” said Platt. His son Oliver, now an actor, got his first audiences in China, the diplomat said, and did his first acting — a staged hockey fight with his brother for a crowd in rural China.

“That’s the end of China then,” said Platt as the lights went back up. But the China of now is marked by “generations of friendship,” he said, from the groundwork laid during those visits in the ’70s.

Platt, who in 1973 set up the first resident diplomatic office in the People’s Republic of China, called his new book, “China Boys” (Vellum, 2010) a first glimpse of opening relations with China by a U.S. staffer. “It’s a chance for the staff level to weigh in,” he said.

Henry Kissinger, then Nixon’s national security adviser, asked Platt to see the book, and later promised to steal its main theme: that the “nuts and bolts” of the U.S.-China relationship staffers created in the early ’70s became the fundament of what is still a resilient strategic partnership.

At a conference earlier this year, Platt said Kissinger was still curious about the new book, which appeared in March. He whispered to Platt in an elevator: “Did you savage me?”

“No,” replied the diplomat, diplomatically. “Just a scratch or two.”