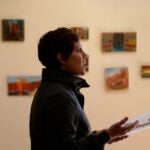 In March of 1970, 46 female journalists filed a landmark gender-discrimination suit against Newsweek magazine. The female employees there — despite filling a quarter of the masthead — were called “dollies.”

That lawsuit turned into a famous moment of second-wave feminism, which swept through the 1970s like a boiling culture storm, setting off social effects still debated today.

A few veteran feminists of that era gathered May 28 at the Loeb Drama Center, forming a panel called “Feminism Then and Now.” A gentle divide opened among the speakers. Older feminists still clamored for sisterhood and complained of uneven progress four decades later. Their younger counterparts wished aloud for a new, broader definition for a movement all about choice and equality.

“We need to build a new girls’ club,” but one that is more welcoming, said panelist Priyamvada Natarajan, RI ’09, a young professor of astronomy and physics at Yale University. “We need a new definition [of feminism], perhaps one that is less loaded.”

Rethinking feminism is required in a global world of immense diversity, she said, making it “a very unequal world along many, many dimensions.”

But Natarajan thanked the older feminists on hand for making her path in academe smoother, and for underlining the durable power of women’s networks that are a refuge in many professions still dominated by men, at least at the top.

Businesswoman Diana Scott ’81 acknowledged the power and necessity of networking, but said the challenges of workplaces today — where “the glass ceiling has been shattered multiple times” — are different than 40 years ago. The issues are about diversity more broadly now, she said, including gender, ethnicity, and cultural diversity. “In order for [corporations] to be successful, diversity becomes a business imperative.”

An older feminist energy was also still evident among the panelists. “I am very optimistic about the future,” said Natarajan of the social pathways feminism has cleared. “But I am impatient. We need to move on fast.”

For one, disparity in wages still exists, she reminded listeners. Her women colleagues don’t give much thought to women’s rights in their lives — until they emerge into a marketplace that pays them $10,000 a year less than their male counterparts, said Natarajan. “Suddenly, they all become feminists.”

Pulitzer Prize-winning journalist Susan Faludi ’81, RI ’09, acknowledged some advances, including at Harvard, where the president and five of the top deans are women, and where the student body itself is half female.

“But all of this celebration should not obscure how far women have to go,” she said. Women can celebrate all the contrasts of “feminism then and now,” she said, but they “remain captive to another prevailing syndrome, which I will call ‘feminism now and then.’ ”

One example is the Newsweek lawsuit of 40 years ago, said Faludi. Despite advances since then by female journalists, only six of the last 49 cover stories at the magazine were written by female writers, she said, citing news accounts, and at the top 15 U.S. magazines, male bylines predominate over female by a 7-1 ratio.

“Feminism’s progress is too often a spasmodic stop-and-start affair,” said Faludi, “with great bursts of mobilization followed by long periods of quiescence and partial amnesia, with the great strides of one generation forgotten — or even disowned — by the next.”

She reminded the audience (which included feminist icon Gloria Steinem) that the female Newsweek staffers tasked to write about the 1970 lawsuit first had to be told it happened. Feminism needs, said Faludi, “a spirit of not-forgetting.”

Journalist Susan McHenry ’72 — who called herself  “a basic witness of early feminist wars” — acknowledged the on-and-off draw of feminism in American culture since 1970, and said that even today many women remain “one man away from welfare.”

But there is hope too, she said, in a younger generation completely unaware of the constraints placed on women until recently. McHenry told about a 9-year-old girl, a friend from church, who was told that not long ago women were not allowed to serve on the altar. “She said: ‘Why not?’ ”

Feminism stays alive in places other than the public arena, said McHenry, such as church auxiliary groups, or anywhere women gather deliberately as friends.

Author and historian Nell Irvin Painter, Ph.D. ’74, BI ’77, a retired Princeton University professor, said that arguments over the place of evangelical religion in feminism almost shattered a women’s group that she belongs to, its members all veterans of the cultural turmoil of the 1970s.

But the key word is respect, she said, concerning value systems outside traditional feminism. This signal of flexibility and inclusion was shared among the panelists.

For instance, how should feminists confront issues concerning women in the Islamic world? It was a question that came up during written questions from the audience. “We can’t stand outside and shake our fingers,” said Painter. “It’s not about our telling them what to do.”

That issue of modern inclusion also came up regarding the military, in the face of the fact that feminism has historically been associated with peace movements.

McHenry noted the historical irony. Faludi mused on “the enormous feminist implications about women breaking through this [military] barrier,” and Scott got right to the broader point. “We’re looking for choice,” she said of women gaining ground in the military. “It’s a positive for the feminist movement, even if there’s an irony involved.”

Success was another leitmotif of the panel. What does it look like to feminists?

“Success is not linear,” said Natarajan, and it can be manifest in your emotional life as well as in the workplace. “There isn’t one track.”

Painter, now an M.F.A. student at the Rhode Island School of Design, defines success her own way. “I’m going to be a very old emerging artist,” she said of her new painting career as an older black woman. Painter saw herself as a counterpoint to the typical artist, “a cute young white person in very tight clothes.”

Faludi had a more traditional, defiant sense of success. “What’s wrong with rocking the boat?” she said, getting a burst of applause. “Having a successful life means rocking the boat in all sorts of ways.”

Scott, the businesswoman, took the broader view again. Success means going to a workplace, she said, “where debate and active disagreement is encouraged.”