T.S. Eliot, warts and all 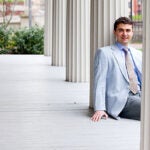 It’s ironic that one of the world’s most lauded wordsmiths struggled in college. But such is the case for Thomas Stearns Eliot, who faced academic probation while at Harvard.

That intriguing tidbit, along with others involving the life of the famous poet, is part of a small exhibition on view at Harvard’s Houghton Library through June 26.

Nestled in a single glass and wooden case at the foot of a staircase in the library’s basement is a modest but meaningful look at the writer’s years at Harvard and what followed them, offering insights into his inspirations, his foibles, and his greatness to come.

The show, “Class Notes: The Centenary of T.S. Eliot at Harvard 1910-2010,” celebrates the 100th anniversary of the poet’s graduation from Harvard and is drawn from the collections of thousands of Eliot items at Houghton Library and the Harvard University Archives.

“Eliot as the great Harvard poet is someone who we’ve always collected in great depth,” said Leslie Morris, curator of modern books & manuscripts at Houghton, who assisted with the exhibition. “We have a fabulous Eliot collection, largely through the generosity of his brother, Henry Ware Eliot Jr., who initially donated a lot of … material, including first editions to Eliot House.”

Some of Eliot’s early poetry as well as critical analysis skills are on view in the intimate show, including a copy of his student paper “The Defects of Kipling.” In the essay, Eliot’s measured handwriting appears in blue, while his professor’s remarks fill the margins in bright red and include the comment, “As usual, you lean to the unduly harsh.”

While at Harvard, Eliot served on the board of The Harvard Advocate, the College’s literary magazine, which also published some of his early poems. There the future Nobel laureate also met his lifelong friend and fellow poet Conrad Aiken.

It was Harvard alumna Carey Adina Karmel ’79, who won the Bowdoin Prize for her senior thesis on Eliot, who conceived of the exhibition.

“I’m fascinated by how Eliot became the poet and critic he would become from his earliest awkward moments,” said Karmel, who came up with the idea while checking footnotes at Houghton Library for a recent essay on Eliot’s “The Waste Land” and Russian composer Igor Stravinsky’s “The Rite of Spring.”

Another item is Eliot’s copy of Dante Alighieri’s “The Divine Comedy.” The Italian poet’s writings are considered a main influence in Eliot’s famous poem “The Love Song of J. Alfred Prufrock.” Eliot’s seminal work was first published in 1915 and was included in “Prufrock and Other Observations” two years later.

The opening stanza of “Prufrock,” one man’s monologue of longing and lament, is on view from a first edition of the work.

School had proved challenging for the young poet. His official college transcript, displayed in the case, includes a range of subpar grades. The small collection of printed material in the exhibition also includes an academic reprimand: a yellowed typewritten letter from 1906 to Eliot’s father from a Harvard official. It opens with the line, “I am sorry to tell you that Thomas’ November record is so unsatisfactory, that the Administrative Board will place him on probation.”

“I think the transcript is amazing. I had no idea that Eliot was on academic probation,” said Morris. “I was surprised. He was so erudite, and yet at first he was flunking out.

“What really interests me is to look at the chrysalis stage of a poet such as T.S. Eliot,” she said, “to see many scary encounters with the academic administrators and unimpressive grades in many classes and also some first drafts of poems that would never have held history’s attention. It gives the rest of us hope.”