Questions on an oil-dark sea 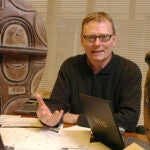 A rippling effect of the Holocaust

Harvard faculty members in fields related to the ongoing Gulf of Mexico spill say that even though it has been nearly two months since the destruction of BP’s drilling platform, oil is flowing from the ruptured well more quickly than answers are to the many questions raised by the disaster.

“They have to stop the oil,” said Ben Heineman, senior fellow at the Harvard Kennedy School’s (HKS) Belfer Center for Science and International Affairs. “And there are other large crisis management issues beyond that which must be addressed before the deeper questions of what were the root causes and how can we prevent such a catastrophe in the future.”

Even the most basic question of how big the spill is remains uncertain. Estimates of flow rates have risen steadily. Also unknown is where that oil is, since dispersants have kept much of it below the Gulf’s surface. The environmental impact of those hidden layers of oil — and of the dispersants themselves — are unknown. Other questions, which await the inevitable investigations, involve the future of deep-water drilling and regulation of similarly risky industrial activity.

“In the short run, this may be one of the worst environmental disasters we have seen, but what the public doesn’t know is the extent of the environmental damage,” said Henry Lee, director of the Environmental and Natural Resource Program at HKS.

Harvard officials are adding their voices to the Gulf crisis. Florida officials have looked to James Shine, senior lecturer on aquatic chemistry at the Harvard School of Public Health, for advice on consuming fish, and President Barack Obama on Monday (June 14) named Dean Cherry Murray of Harvard’s School of Engineering and Applied Sciences to a panel investigating the disaster and its implications for future drilling.

HKS researchers, meanwhile, are probing the implications for the oil industry’s future — and that of other industries at risk of rare but potentially cataclysmic disasters, including nuclear power, chemical manufacturing, and airlines.

To Shine, whose aquatic biogeochemistry research group studies the transport, fate, and effects of pollutants in aquatic ecosystems, a key question concerns the dispersants, the chemicals spread on the oil to break up slicks into smaller droplets.

Dispersants have been tried in the past without demonstrably helpful results, Shine said. Though it may seem that dispersing the oil into smaller concentrations is a good thing, there are problems with that strategy. First, he said, researchers know how oil slicks behave. They float on the surface where some oil evaporates and the rest is affected by wind and waves in predictable ways. Dispersants, however, keep the slicks underwater, possibly layered at various depths, and eventually deposit them on the seabed.

Also unknown, Shine said, is the effect of the dispersants on marine life. While much attention has been paid to the potential effects of the oil on birds, fish, and other marine life, dispersants also can affect biological oils, such as those coating fish gills.

In many cases, Shine said, the use of dispersants boils down to a question of which ecosystem we want to pollute most. Floating oil that reaches shore can affect marshes, which provide important ecosystem services, such as flood control, and act as nurseries for many marine species. But dispersed oil that remains at sea can contaminate seafood and damage fishermen’s livelihoods.

Some of the oil will be cleaned up on the beaches, and some will break down biologically, but much of it will wind up in sediments, where it can continue to harm ecosystems. Oil from a spill in Buzzards Bay in Massachusetts in the 1970s is still measurable in nearby marshes, Shine said.

The longer the well continues to gush oil into the Gulf, however, the more variability there will be in the answers to these questions, Shine said. As the seasons change, weather patterns shift as well, and hurricanes become more likely, affecting the spill in unforeseen ways.

Lee said that even authorities who might be expected to know more about the spill and its behavior before the public does, such as Jane Lubchenco, administrator of the National Oceanic and Atmospheric Administration, admit that tremendous uncertainty remains about the spill’s effects. Even the facts that researchers think they know may not prove so accurate, Lee said.

The size and scope of the disaster throws not just the future of offshore drilling into doubt but also the regulatory bodies that had overseen it. Lee believes that the disaster makes it less likely that drilling will be allowed in other key areas, such as off the Atlantic coast, off southern California, and perhaps off Alaska.

Still, offshore drilling as an energy strategy is likely to continue, Lee said, because new oil discoveries continue to be made under the oceans, and the nation’s economy needs the fuel. Still, he applauded the Obama administration’s moratorium on new deep-sea drilling, which should allow time for some of these issues to be worked out.

In the months ahead, Lee predicted that technological problems, systems shortcomings, and human error will be shown to have contributed to the Gulf disaster. But he also predicted that the industry will develop a newfound fervor to monitor safety in other locations.

The industry’s biggest problem, Lee said, will be the government response. With public pressure to mitigate damage, recoup losses, punish those responsible, and safeguard the future, it is possible that get-tough regulatory measures could make it harder for oil companies to do business. BP is an obvious target for governmental ire, Lee said, but the company is large enough to handle even billions of dollars in fines, repayments, and other costs.

The eventual effects of the spill will likely be felt beyond the oil industry, said Heineman. Industries that could experience similar catastrophes — low probability but high consequence, such as chemical manufacturers, nuclear power plant operators, and even emerging industries where risks aren’t clearly defined, such as nanotechnology — may feel the effects of BP’s woes, Heineman said.

Leaders in such industries may have to calculate how much to spend to ensure that a cataclysmic event doesn’t happen, which is a difficult calculus for profit-making companies, since it requires large sums to prevent an event that might never occur.

In the past, Heineman said, industry leaders might have had to plan for a one-in-a-million chance of a catastrophe. In the future, they need to plan for one-in-a-billion or one-in-a-trillion mishap, rendering risk as close as possible to highly remote in fact, not just in theory.

New technology to improve the safety of deepwater drilling will also be needed, Heineman said, and perhaps required by regulators. “We have to have new technology and innovation, but what degree of safety are we going to require? We’re in a world where our technological capacity may be outstripping our ability to manage technology,” Heineman said.

Heineman said there was a failure of leadership on several fronts in the Gulf disaster. BP’s managers damaged the company’s reputation by failing to secure the well, and by their repeated inaccurate assessments of the amount of oil flowing from it. That issue, he said, has also hurt the federal government’s credibility. Instead of going along with BP’s flow estimates, he said, the Obama administration should have a leader of national stature in overall control of the response and should have assembled much more quickly teams from the public sector, the private sector, and academia to continuously develop facts, articulating for the public what we know, what we don’t know, and how we can close the gap.

“The government has failed to convene the right kind of scientific experts who can be transparent about what we know and what we don’t know,” Heineman said. “In a national disaster like this one, the government is responsible for the facts, and for demarcating which private sector and which public sector authorities are responsible both for developing response action options and then for implementing them. The government gets low marks for such a coherent and comprehensive effort to date.”