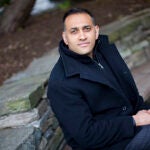 Palestinians on the screen

While traveling in South America after college, Gabriel Paquette became intrigued by old buildings, churches, and other remnants of the continent’s colonial past.

“I was very interested in the residues of colonialism,” said Paquette, “but I was also fascinated by the processes that had led to these amazing structures.”

Paquette, a visiting lecturer in history and literature and a research associate at the David Rockefeller Center for Latin American Studies, is the editor of a recent book titled “Enlightened Reform in Southern Europe and Its Atlantic Colonies, c. 1750-1830.” The volume examines the impact of Enlightenment thought on government action in Latin America, Brazil, France, Italy, Portugal, and Spain during the 18th century.

“I am interested in how ideas developed in places very far from centers of power — like universities, think tanks, or civic associations — are actually taken up and used by states,” he said.

“As a historian, I wondered if there were any precursors to the contemporary process of information and technology transfer between the government and the private sector,” he said. “In the late 18th century, European nations such as Britain, Portugal, Spain, and France all began trying to reform their empires. It turns out that they did this by incorporating Enlightenment thought into their statecraft. They borrowed new ideas about economics and used those ideas to raise revenue; they took new ideas about organization and applied those ideas to military reform.”

The book grew out of a 2007 conference Paquette organized at Trinity College, Cambridge, where he is a junior research fellow in European and Latin American history. Twenty-one historians contributed to the resulting volume, which includes an introduction by Paquette.

“The idea was to have all the essays in some sort of dialogue with each other,” he said. “Oftentimes contributors to edited volumes have never met. In this case, everyone read each other’s work and actually tried to incorporate other people’s ideas into the final product.”

Past scholarship about the impact of Enlightenment thought on government policy has concentrated largely on Northern, Central, and Eastern Europe. Paquette’s book focuses new attention on states previously considered “backward.”

“There is a general perception that the monarchies of southern Europe weren’t innovative or particularly attuned to new currents of thought, or that they just imitated their northern counterparts,” he said. “In actuality, far from being backward or retrograde, these countries were experimenting with remarkably creative new policies and statecraft. The idea behind the book was to show the real dynamism of southern European politics in the late 18th century.”

The 2007 conference and subsequent editing process transformed Paquette’s original conception of the book.

“The model I had in mind — government taking the best ideas of its day and trying to weave them into its policies — isn’t the most accurate picture,” he said. “The monarchies actually served as incubators for reform. They encouraged and created the types of public spaces that produced innovative ideas.”

Contributing author John Shovlin, a visiting scholar at Harvard’s Center for European Studies and an associate professor of history at New York University, explained in his essay how the French monarchy played a deliberate and important role in fashioning a new public culture.

“The monarchies of southern Europe weren’t merely siphoning off the best ideas,” Paquette said. “There was a real synergy between what governments were trying to do and the kinds of ideas that were being produced in places like universities, societies, civic associations, and even in the private sector. The information exchange wasn’t always unidirectional. It was more of a collaborative process.”