A rippling effect of the Holocaust 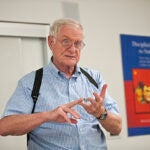 In Russian areas most devastated, economic growth has lagged

Russian cities and regions whose Jewish populations bore the brunt of deaths and displacement in the Holocaust have seen lower economic growth and wages ever since, according to a detailed new analysis of seven decades of Soviet and Russian data. These same areas have tended to resist political reform, exhibiting greater popular support for Communist candidates since the collapse of the Soviet Union.

The findings, by political scientists and economists at Harvard University, the Massachusetts Institute of Technology, and the University of Chicago Booth School of Business, are presented in a new working paper published by the National Bureau of Economic Research.

“The Holocaust wiped out many of the most educated and productive people in western Russia,” said co-author James A. Robinson, the David Florence Professor of Government at Harvard. “It was a major shock to the social structure of the invaded regions, dramatically reducing the size of the Russian middle class. While there is a broad body of literature on the psychological effects of the Holocaust, there has been almost no study of the long-term economic and political impact on the societies left behind. We set out to better understand how this cataclysmic event has continued to reverberate in Russia.”

Most historians believe that a million Soviet Jews perished in the Holocaust, as the German army thrust into Soviet territory in 1941, followed by paramilitary death squads that systematically eradicated Jewish populations.

Robinson and co-authors Daron Acemoglu of MIT and Tarek A. Hassan of Chicago Booth found that the killing of Jews in the Holocaust appears to have hurt many Russian cities and regions by permanently reducing the size of the middle class there. The analysis shows that Jews, despite being a small minority, made up a disproportionate share of the Russian middle class. Before World War II, 67 percent of Russian Jews held white-collar jobs, compared with only about 15 percent of non-Jews. In some of the invaded areas, 70 percent of physicians and many workers in high-skill jobs in trade and education were Jews.

In the 11 Russian oblasts (administrative districts) most affected by the Holocaust, the Jewish population declined by an average 39 percent between 1939 and 1959. These areas now have markedly lower per-capita gross domestic product and lower average wages. The average GDP per capita was just $4,555 in 2002, compared with a nationwide average of $5,855.

Acemoglu, Hassan, and Robinson also found a lasting tendency toward anti-reform politicians in these regions. In the 11 oblasts that suffered most under Nazi occupation, voters in the 1990s were more favorably disposed toward Communist candidates than were citizens in other regions. They also demonstrated greater support for preserving the Soviet Union in a 1991 plebiscite called by former Soviet leader Mikhail Gorbachev.

While the correlation between economic and political outcomes and the decline in Jewish population is a strong one, Robinson cautions that the relationship may be influenced by other factors.

“We find a robust relationship between the decline in Jewish populations and subsequent economic development, but this study is not meant to be the final word on this topic,” he said. “This is a first attempt to analyze this question, and one which will hopefully encourage other researchers to study the long-term political and economic effects of this wrenching event.”

The research was funded in part by the William A. Ackman Fund for Holocaust Studies and the Warburg Foundation.