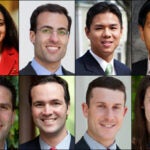 Surgeon John Norman says the difficulty doesn’t come in recalling his Harvard memories, but in stopping himself from talking about them all.

A member of the Class of 1950, Norman refers to himself and his one-time housemates as the “Dunster funsters,” and recalls that Radcliffe and Emerson colleges were their “happy hunting grounds to chase girls.”

Dunster House was ever rife with activity, even then. Thursday evenings, according to Norman, were reserved for after-dinner chocolate ice cream — no doubt a luxury for burgeoning academic minds — while high tea, demitasse, and coffee were standards for the lads. House Master Gordon M. Fair, then an associate professor of sanitary engineering, oversaw the in-house tutorial staff and undergraduates.

Norman, who went on to graduate from Harvard Medical School (HMS) in 1954, recalls a study technique from classmate Mitch Rabkin ’49, M.D. ’55, who “continued to hone and refine a mnemonic to recall the cranial nerves described in Alfred Sherwood Romer’s comparative anatomy text, ‘The Vertebrate Body.’ ”

After Harvard, Norman completed his postgraduate training at hospitals in New York City, England, and Ann Arbor, Mich., before becoming an associate professor back at HMS. From there, he left for Texas, helping to establish the Cardiovascular Surgical Research Laboratories at the Texas Heart Institute, among many endeavors.

But in the 60th Anniversary Report for the Class of 1950, where alumni update classmates on the happenings in their lives, Norman, who now lives in Concord, Mass., recalls his “memorable clinical encounters” — including meetings with actor Spencer Tracy; Richard Nixon’s secretary of state Alexander Haig; Edith Piaf, “the diminutive chanteuse, away from her native Paris and wistfully lonely in New York City”; Herbert Hoover, “as a private citizen and engineer, decades after his U.S. presidency”; even actress Elizabeth Taylor with producer Mike Todd, “after her performance in the film ‘National Velvet’ and before his making ‘Around the World in 80 Days.’”

William Opel ’50 credits his alma mater with sparking his lifelong quest of seeking out and understanding other cultures (not to mention with meeting his wife of 58 years, Nina Emerson, Radcliffe ’50).

As an undergraduate, Opel pursued the new social relations concentration, led by psychologist and faculty member Gordon Allport. “Its multifaceted approach seemed to be the most appropriate in opening up my understanding of the way individuals, groups, and culture worked,” remembers Opel. “It did just that.”

“At Harvard, I had come from a small Midwest town with pervasive racial and religious prejudices. It was not until I had the opportunity to study with Allport on the source and nature of prejudice that a final coffin nail was put into my own inherited prejudices,” he says.

Opel claims that he “spent as much time singing as I did studying.” He was a member of the Harvard Glee Club, the Sunday choir, and the daily chapel choir, noting that the club and Radcliffe Choral Society were the performing choruses for the Boston Symphony Orchestra (BSO).

“Most memorable was a performance of Mahler’s ‘Second Symphony’ by the BSO under the direction of the young Leonard Bernstein,” remembers Opel. “When he entered Symphony Hall for a rehearsal in a bright yellow turtleneck and tousled black hair, an audible sigh went up from the Radcliffe Choral Society.

“I am told by my wife that some of the members of the Radcliffe Chorus returned to Moors Hall [inside Pforzheimer House] and immediately formed the ‘I Love Leonard Bernstein Fan Club!’ ”

During his thirties, Opel joined the Peace Corps and traveled to Africa as a staff member for nearly four years in the late 1960s. He became an Episcopal priest and educator before retiring in Eastham, Mass. Now a secular humanist, Opel says he “has a deep appreciation for the role of myth and an evolving religion orientation in creating, articulating, preserving, and challenging cultural values and institutions.”

Both Norman and Opel are just two in a legion of worldwide Harvard alumni who travel annually to attend reunions in the Yard and who continue to spread their wealth of experiences personally and professionally, in ways big and small, locally and around the globe.

They have high hopes for the Class of 2010, and a message.

“We older Harvards will always be with you,” says Norman. “We hope that the next 60 years will be as good to you as the past 60 have been to us. You have our every good wish for continued success.”

“Join the Peace Corps!” Opel advocates. “But if you can’t, travel widely. Eschew the four- and five-star hotels and travel second- or third-class and walk, walk, walk. In meeting people from other cultures, you may be lucky enough to meet yourself.”