The future of faith 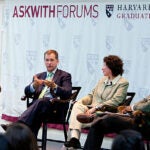 Teaching beyond the tests

Harvard University was founded in 1636 with the aim of advancing learning and developing an educated ministry that could help guide communities in North America.

The Harvard Divinity School (HDS) was established in 1816 to help further that mission.

Almost 200 years later, a panel of scholars, students, ministers, and laypeople explored the future of faith during the daylong seminar “Finding Our Way Conference,” sponsored by the School’s ministry studies program.

Specifically, the conference examined the changing landscape of religion in the United States and its implications for both churches and education for ministry.

“We are in the midst of really significant change,” said HDS Dean William A. Graham, of the steady decline in mainline Protestant Christian denominations around the country and their influence as “a major force within American life.”

Graham, the Murray A. Albertson Professor of Middle Eastern Studies in the Faculty of Arts and Sciences and John Lord O’Brian Professor of Divinity, opened the daylong panel, which was held at the Charles Hotel in Cambridge, Mass., on April 24.

The host of the National Public Radio show “Speaking of Faith,” Krista Tippett, delivered the event’s keynote address, adding her perspective as both a religious scholar — she received her master of divinity degree from Yale Divinity School in 1994 — and a journalist to the discussion. Prior to launching her radio program, Tippett worked as a freelance correspondent covering divided Berlin during the 1980s.

With her remarks, she offered her view on three “problematic assumptions” about religion.

Rejecting the theory that religion is a crutch, Tippett said religion instead helps people make sense of the “meaning of life,” allowing them to cope with challenges like the influx of information driven by technology, and a scientific landscape that presents choices once considered unimaginable.

“The complexity of our age is driving people back to the enduring responses of ethical and spiritual thinking that our great traditions have carried forward in time.”

A second problematic assumption with religion, said Tippett, is the notion that it “is subjective.”

Religious ideas are universally treated as “soft,” she argued, because it is “agreed they are entirely subjective,” while other kinds of subjective opinion, like political analysis and economic forecasting, are generally taken seriously.

Tippett referenced an online survey in which she asked her listeners and former guests of the show if the recent economic crisis was also a “moral and spiritual” one. She was surprised by the common response offered by a wide range of people, that the loss of human community “had something to do with what had gone wrong and that recovering that had to be part of our way of living forward.” This type of reasoning, she added, while indeed subjective, “belongs in our common life” and offers practical tools to address suffering that can “otherwise overwhelm us.”

For most adherents, religion is first and foremost about “how you pray, when you pray, what you do, how you live,” said Tippett, who called equating religion with belief  “one of the most narrowing instincts in American culture.”

“The language of belief has led us to place voices of faith in the marketplace of certainty and fact and argument. This gets all of us into trouble,” she added, offering instead religion as a type of inspiration like that which comes from art.

“Faith’s territory is the drama of human life, where art is more precise than science, where ideas are lived and breathed.”

Tippett concluded her discussion with her hope for “a new generation of public theologians at every level of American life.”

“I think this could be a mantle uniquely suited to progressive Christians, a way to reframe the challenge and meaning of religious identity, public expression, and even institutional vitality.”