Looking for his big break 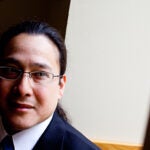 Derek Mueller sang and acted his way through four years at Harvard, and now, with Commencement looming, he’s taking his show on the road.

Mueller, a senior psychology concentrator and Mather House resident, spent the past three years as a member of the Hasty Pudding Theatricals, the nation’s oldest collegiate theatrical troupe, known for its annual burlesque show and for its traditional roasts of a Man and Woman of the Year, selected from the ranks of the world’s top entertainers.

For the past year, Mueller served as Hasty Pudding’s cast vice president, helping guide the creative process that led to this year’s production, “Commie Dearest,” a heartfelt tale (not really) about a young girl (a man) in the 1950s suburbs, joining forces with communists to fight misogyny and win the American Dream. Mueller played “Olive Lucy,” the owner of the local bowling alley (what could be more American?) where the townspeople congregated.

With work on next year’s production beginning in the spring, Mueller said Hasty Pudding dominated his time at Harvard, though he also spent his freshman year with the Krokodiloes, Harvard’s oldest a cappella singing group. Mueller said the Krokodiloes’ extensive summer tour allowed him to see countries on six continents.

The Hasty Pudding Theatricals experience is so consuming that each spring when the year’s performance — which includes a spring break tour to New York and Bermuda — is over, Mueller said he finds himself at loose ends.

“After the show ends and I get back from Bermuda, I don’t know what to do with my time. I wander about like a lost puppy,” Mueller said.

Of course this year, with graduation looming, Mueller has a bit more to contemplate. When asked his plans, Mueller said without hesitation, “I want to be a pop singer.” He plans to embrace the vagaries of fame, fortune, and the entertainment industry and head west after graduation to Los Angeles, where he’ll work the phones and Internet and see what happens.

After describing his plan, Mueller, who hails from Cincinnati, hastens to say that he’s not normally as impulsive as the plan sounds, but that it’s time for him to make this kind of a move and it’s one he’s excited about.

Mueller has been interested in music since he was young. On arriving at Harvard, he decided not to pursue a music degree because it is focused on theory and he is more interested in performance. Psychology allows him to understand people better, which helps in acting. In addition to his time with the Krokodiloes and Hasty Pudding Theatricals, Mueller composed, sang, and played piano on his own. He acknowledges that the Hasty Pudding’s style is different from his own music, but he relishes the Pudding experience nonetheless.

When asked what advice he’d give incoming freshmen, Mueller advises them not to listen to any.

“Make your own mistakes,” Mueller said. “Trying to apply what others learned from their mistakes will short-circuit your own experience.”