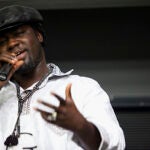 Catherine Lord ’70 is known for creating challenging and provocative art that tests boundaries. But when she arrived at Radcliffe College in 1967 she was a confused and naïve first-year student.

“The thing that saved me was discovering the stacks of Widener,” said Lord, who was presented with the Harvard Arts Medal on April 29 by President Drew Faust at the New College Theatre. “That was a utopia. I can’t even describe how powerful it was. I had never had access to that kind of library before, and I was able to just go in there and wander and wander and wander and take things off of the shelf and look at things that were actually quite rare.”

An artist, writer, professor, and scholar, Lord’s challenging photography and writing explores feminist, queer, colonial, and cultural themes though language and image. Before receiving the award, actor John Lithgow ’67, Ar.D. ’05, moderated a spirited discussion with the artist, in which she reflected on teaching, her work, and her time at Harvard.

Lord later went on to teach at Harvard, and she is now professor of studio art and women’s studies with the Department of Visual Culture at the University of California, Irvine. She is the first visual artist to receive the medal since the award was established in 1995.

The event kicked off Arts First, a celebration of the arts from April 29 to May 2, presented by the Office for the Arts at Harvard and the Board of Overseers. The Arts Medal is presented annually to a Harvard or Radcliffe alumna or alumnus in recognition of excellence and achievement in the arts.

Born in the Caribbean nation of Dominica, Lord attended a British boarding school in Barbados until her family moved to Iowa when she was 13.

Lord hadn’t yet begun taking pictures while an undergraduate — she didn’t begin that until she attended a small photography school in Cambridge after graduating. She worked as a research assistant at the Schlesinger Library at Radcliffe and went on to pursue an M.F.A. at the Visual Studies Workshop at the State University of New York at Buffalo.

While in graduate school, she became aware of the volume, the avalanche of images present in our society, whether high art or otherwise.

“That really got me interested in trying to account for this huge, huge image culture, without recognizing any divisions,” said Lord.

In his introduction, Lithgow described the ways her art explores the anxiety surrounding homosexuality and promotes lesbian visibility in contemporary art history. Much of Lord’s work exists at the intersection of photography and the written word. She has undertaken many projects that involve photographing books. Last Thursday, she talked about a project involving a series of photographs of book dedications. She explained that she was interested in the dedications’ back stories as well the fact that the text is not indexed.

“That was the interest for me in photographing these bits of paper, this fascination with the idea of a category of writing that you can’t find easily. You have to go through the bookshelves,” said Lord. “I’m really interested in this idea of drawing and printmaking having to do with ink on paper, and then at the same time this ink on paper making a very, very complicated gift.”

Lord also talked about her battle with breast cancer, which she was diagnosed with at 54. She documented that experience in her memoir, “The Summer of Her Baldness: A Cancer Improvisation.”

Particularly in the past 15 years, Lord has been drawn back to the Caribbean for her work and her personal life. She has undertaken a recent project, titled “The Effect of Tropical Light on White Men,” surrounding a “commonplace book,” a kind of scrapbook or memory book that belonged to white plantation owners in the late 19th century.

“When we created the Arts Medal in 1995, this was exactly what we intended,” said Lithgow as the evening concluded. “It’s very important that Harvard honor people like Catherine, with her kind of courage, audacity, nerve, and brilliance.”