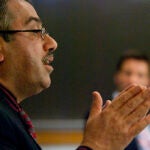 Reflects the moral choices that are made in battling terror

Fundamental American principles of freedom and justice are at the heart of an unsettling film that was screened at Harvard on May 4.

“The Response,” a 30-minute work created by actor, producer, and lawyer Sig Libowitz, is based on transcripts from military tribunals held at the Guantanamo Bay detention camp in Cuba, which at one point housed more than 700 people suspected of having links to terrorism. The tribunals were established to determine whether detainees had been correctly classified as “enemy combatants.”

In the film, Aasif Mandvi, an actor known largely for his comic work on “The Daily Show,” gives a disturbing performance as a man held for four years because of suspected connections to the terrorist group al-Qaeda. Tight camera shots of Mandvi’s face add to the drama of a tense courtroom scene as he pleads his innocence before three military officials who repeatedly question him about evidence he is forbidden to see.

The officials deliberate Mandvi’s fate in the following scene. A heated exchange between two of the three military officers, a Colonel Simms, played by Kate Mulgrew, and a Colonel Jefferson, played by Peter Riegert, highlights the film’s underlying dilemma.

“Are you willing to keep him locked up based on suspect evidence he can’t even hear? If we are fighting an ideological war, shouldn’t we be holding on to an idea worth fighting for, say, like the Constitution on the rule of law?” Jefferson asks.

Wary of letting a potential terrorist walk away, Simms responds, “We are compelled to make the best decision we can under the laws we were given. Obviously it’s not a perfect solution.”

It is left to Libowitz, a conflicted Captain Miller, to cast the deciding vote. The film ends, and it’s left to the audience to decide which choice he makes.

The screening at Boylston Hall’s Fong Auditorium and following panel discussion were sponsored by the Humanities Center at Harvard.

The status of such detainees is “troublesome from the human rights perspective,” said Jacqueline Bhabha, executive director of the Harvard University Committee on Human Rights Studies and the Jeremiah Smith Jr. Lecturer in Law, who moderated the panel.

The film, said Bhabha, reveals how a complex situation can fall “prey to prejudice and emotion,” in the absence of any clear rules.

At the heart of “The Response” are profound questions about the U.S. justice system in the aftermath of the 9/11 attacks. With its narrative, the film asks its audience to consider what course of action is fair and just during a war on terror; what kinds of restrictions to civil liberties and human rights are acceptable when it comes to national security; and if information gained during interrogations involving torture can be considered reliable.

It was at the University of Maryland School of Law, where Libowitz was taking a class on homeland security and the law of counterterrorism, that he first read the military transcripts that took his breath away.

“I just knew I had to learn more,” he, said, adding that as he dug into the research he also quickly realized “there was a film there.”

Upon completing the film, Riegert said he understood how much he took his freedoms and the American system of law for granted.

“I have come to appreciate how little I investigated what American law is and how crucial habeas corpus is to the definition” of the United States.

The question of whether or not to give the detainees habeas corpus — a legal standing allowing a detainee to appear in court before a judge to determine whether he or she has been lawfully imprisoned — has become a dizzying juggling act among the Congress, the Supreme Court, and the sitting president since detainees first were sent to the camp in 2002. Ultimately, a 2008 Supreme Court ruling held that the Guantanamo Bay detainees should be granted access to the U.S. judicial system.

“Stage one was no process, stage two was the sort of kangaroo proceeding that you saw [in the film], stage three is habeas corpus judicial review proceedings in Washington, D.C., before independent federal judges,” said panelist David Cole, professor of law at Georgetown University.

Of the 40 or so such cases that have reached conclusion in the third stage, 75 percent of the time the judges have ruled there is “insufficient evidence to conclude that these individuals are enemy combatants and have ordered them released,” said Cole.

“That’s a pretty remarkable statistic,” Cole added, arguing that the convoluted process involving the detainees has resulted in two major costs for the United States.

The first, he said, as depicted in the film, is the cost of torture.

“When you employ coercive tactics to get information from people, as we did at Guantanamo, you taint that information forevermore.”

Cole said the second cost was the approach, taken by the Bush administration, that “going forward, the law will play no part in what you do.”

Panelist Noah Feldman said the film can’t be considered a tragedy in the classic sense because it “sets up a possibility of a structure of horror followed by resolution,” where American systems of justice (or in this case Libowitz’s character, Captain Miller) do the right thing. But the picture in the real world, he said, makes him decidedly more nervous.

“My nervousness in the real world,” said Feldman, who is Harvard Law School’s Bemis Professor of International Law, “is about the question of what’s next?”

Even if President Barack Obama is able to keep his campaign promise and close Guantanamo, “We are still stuck with the problem of what to do with people who allegedly … are connected to an organization or set of organizations that see themselves more or less at war with the United States,” said Feldman.

For Libowitz, the film, which has screened at college campuses, the Pentagon, and the Department of Justice, asks audiences to ponder how to find a balance between national security and civil liberties.

“Where we decide we are — what that balance point is — is who we are as a country. I think that is something that everyone has to answer.”