Exploring a world within a world 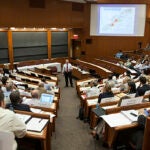 Money not cure-all for health care

Senior thesis looks at lichens as a bacterial habitat

What if your whole world consisted of the inside of a lichen?

It would certainly be a strange and unusual world. But what would your community look like? Would it be different in different places in the lichen? And, is it possible that your world might last forever?

Graduating senior Alexandra Mushegian, an organismic and evolutionary biology concentrator from Currier House, spent the past year exploring some of those questions, working on her senior thesis in the lab of Associate Professor of Organismic and Evolutionary Biology Anne Pringle. Mushegian examined bacterial communities living within lichens, trying to determine whether they differ between the older middle part of the body and the lichens’ younger edges.

Lichens, Mushegian said, have a mysterious pull for those curious about the world around them. They’re everywhere and nowhere at the same time, since most people walk by lichens lining trees and stones around campus without giving them a single thought.

“There’s this poetic aspect that a lot of times they’re overlooked, but they’re sort of strange and wonderful,” Mushegian said.

Pringle, an expert in fungi and lichens, spends a lot of her time tracing the path of the invasive and highly poisonous deathcap mushroom in America, but says lichens are so accessible and so many questions about lichen biology remain that they’re a scientific source she’s tapped repeatedly when searching for student projects.

“The lichen project … I’m still unpacking that box. There’re millions of different things to do there and I think people walk away with a different view of the world,” Pringle said. “The idea that lichens are microecosystems, worlds within worlds, it’s a very powerful idea.”

Mushegian sampled closely related lichens growing on headstones in a graveyard in Petersham, Mass., sampling several locations on each lichen body, known as the thallus. The results showed that the bacterial community varies depending on where in the lichen it is found — it’s more diverse in the lichen’s center — and that communities at the centers of different lichens are more similar to each other than they are to the communities at the edges of their own lichen. She found between 10 and 40 species of bacteria in each community and that the longer-lived communities in the middle seemed to have adjusted to lichens’ acidic chemistry, since they had more acid-loving species.

In studying lichens, students get to study two organisms, not one. Lichens are a symbiosis of fungi and photosynthetic algae. In exchange for carbohydrates produced by the algae, the fungus provides housing. The partnership is one of nature’s most successful, with lichens living in some of the planet’s most inhospitable environments, from the desert to the tundra.

Mushegian, who plans to work in a laboratory in Sweden after Commencement, is the latest in a series of undergraduates who found their senior thesis topics in Pringle’s lab. In fact, the last one to do so, Rebecca Compton, who graduated in 2009, liked the project so much she stayed on another year to expand it further.

Compton, whose future plans include medical school, spent this year examining both the species diversity of lichens and the genetic diversity within lichen species along a pollution gradient from rural western Massachusetts to Boston, adding intraspecies genetic analysis to a common exploration of lichen sensitivity to pollution.

“I really just loved this project so much and I was taking a year off before medical school so this was a good way to spend the time,” Compton said. “I was excited about the project and wanted to see it to completion.”

The work to better understand the local lichen community is also helping lay the groundwork for a larger project that Pringle is contemplating to explore the provocative question of whether or not lichens are immortal.

Among lichens’ strange characteristics is their long lives, so long, in fact, that a whole discipline has arisen with that characteristic at its foundation. Lichenometry is the estimation of something’s age by calculating the age of nearby lichens, using their size and known growth rates. Lichenometry, Pringle said, is used mainly for things that are older than the written history of an area but too young to be effectively carbon-dated. Lichens are routinely used to date things that are hundreds of years old.

Extreme long life would not be unprecedented for an organism largely made up of a fungus. Certain types of fungi are known to be among the planet’s oldest living things. Individuals of the honey mushroom species, which spread by sending underground filaments through the soil, are estimated to be thousands of years old.

“There’s an accepted wisdom among people who I respect that filamentous fungi are immortal,” Pringle said. “To me, that seems a completely fascinating and important question.”

Before she can start on the project in earnest, however, Pringle has to lay the groundwork, understanding growth rates of different lichens in a particular environment so she can know how old they are. Then, she said, she can sample younger and older individuals, examining their gene expression and their chemistry for signs of senescence.

Pringle said exploring the life span of lichens fits well into her ongoing studies of the spread and demography of fungi by helping her better understand birth and death within a population. And, even as it helps illuminate scientific questions, the study of lichens also provides ample opportunity for training a new generation of students.

“Lichen work has been an amazing tool to draw people in and get them excited,” Pringle said. “I’ve always enjoyed having an undergraduate who is interested in science learn really how to do science. If they do it well, they walk away with a great experience, even if they never do science again.”