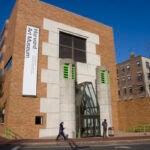 Around the Schools: Harvard Art Museum

At a Meeting of the Faculty of Medicine, May 20, 2010, the following Minute was placed upon the records.

Daniel Charles Tosteson, former Dean of the Harvard Faculty of Medicine and Caroline Shields Walker Distinguished Professor of Cell Biology died on May 27, 2009, after a long and courageous struggle with Parkinson’s disease. His 20 year’s leadership of the Harvard Medical Faculty was marked by innovation, change and renewal. His imprint on the Medical School will be felt for generations to come. The works of his stewardship included: a robust and revolutionary course-of-study for medical students; a vitalized graduate program in the medical sciences generally acknowledged for its excellence; exceptional appointments to leadership positions in basic and clinical departments; new initiatives in the social as well as the life sciences basic to medicine; improved and expanded physical facilities for teaching and research; and extraordinary increments to the Medical School’s resource base.

Dan Tosteson was born in Milwaukee on February 5, 1925. His father, Alexis, was a civil engineer and his mother, Dilys, was the youngest of 13 children born into a Welsh coal mining family that had immigrated to the United States. Dan had a childhood interest in sailing begun with a small center-board boat on Lake Michigan. A daring skipper, he once capsized and sank his craft; this did not deter him from a life-long love affair with the sea and sailing. At Wauwatosa High School he played quarterback on the football team. On matriculating at Harvard College in 1942, he continued to play football, seriously injuring one knee.

One of us (AR), started at Harvard College with Dan as Tuition Scholars working at the Harvard Union. Dan’s youthful enthusiasm and zest for life coupled with a fearless willingness to address problems made an impression on his classmate who thought of him as a “young Viking”, one with a vigorous and aggressive outlook. Both joined the Harvard program for training naval officers. Dan, taking the war-time accelerated plan, enrolled at Harvard Medical School in 1944.

As a student at HMS, Dan was intrigued by salt and water homeostasis and spent a year working with Eugene Landis, Head of the Department of Physiology. This interest in ion-transport absorbed him for the rest of his life. During his residency at The Presbyterian Hospital in New York City he became curious about the properties of red-blood-cell membranes and pursued that curiosity as a post-doctoral fellow at Brookhaven, NIH, Copenhagen, and Cambridge.

Dan’s first faculty appointment, in 1958, was to the Physiology Department at Washington University. Within three years, he was called to chair the Physiology and Pharmacology Department at Duke University, and later appointed a James B. Duke Distinguished Professor. While at Duke, he played an increasingly active role in the American Physiological Society, ultimately becoming its President. At the same time, he began to fervently address issues in the education of medical students, playing a major role in an imaginative curricular reform at Duke as well as actively engaging colleagues at the American Association of Medical Colleges. Addressing the Association as the Alan Gregg memorial lecturer in 1980, he said:

“We are in early stages of a profound transformation of all aspects of medical education. The depth of this transformation reflects the radical changes in our views of man as organism that are arising from new discoveries in molecular and cellular biology. These changes constitute one of the great revolutions in the history of human understanding, comparable to the structure of the solar system, or of electricity, or of atoms, or of biological evolution … we are, in some ways, at dawn on the eighth day of creation”.

Dan was clearly marked for high academic leadership. In 1975, he was appointed Dean of the Pritzker School of Medicine at the University of Chicago. Two years later, he was called by one of us (DB) to Harvard Medical School.

With an ambitious agenda for his time as Dean of the Harvard Faculty of Medicine as well as Dean of Harvard Medical School, Dan’s first thought was to the organization of his office. He expanded the existing leadership group by creating separate offices for clinical, student, academic, and administrative affairs, recruiting senior individuals to fill those positions. He began immediately, as he did each summer, to review the situation at the School with this group and select a very short list of key priorities. He worked with them to develop a strategy for achieving each one and made sure throughout the year that he was never too diverted from his priorities by the endless duties and crises, great and small, which crowd the calendar of every dean. Once he chose an objective, he was tireless in pursuing it. When one goal was reached, he would turn his attention to the next. In any single year, the number of priorities may have seemed small. Over the entire span of his deanship, however, he was able to accomplish much more than he could possibly have done had he attempted to deal with every issue at once. The result was a record of accomplishment that is remarkable by any measure.

His approach to reform of medical education is an example. He appreciated that the explosion in molecular biology and rapid advances in medical technology meant that the canon of medical knowledge would continually be modified in every medical student’s professional lifetime and preparation for rapid change needed to be the basis for learning the elements of biomedical and clinical science. Moreover, in addition to providing students with tools for gaining and evaluating new knowledge, medical schools needed also to be responsible for the acquisition of those skills and attitudes that all nascent physicians should share.

At a summer decanal retreat in 1979, two years into his deanship, a three-part strategy was annunciated. 1) generate faculty interest; 2) plan a new curriculum; and 3) obtain faculty approval. In time, a fourth imperative became apparent: find funding for the enterprise.

Generating faculty interest was approached through a series of annual workshops and symposia. The symposia brought in outside speakers who addressed various educational issues inside and out side of medicine. The workshops were wide-ranging internal dialogues among the School’s students and faculty.

In 1982, Dan felt there were sufficient numbers of faculty engaged to begin a planning process. Planning groups produced a thoughtful set of attitudes and professional characteristics, skills, and knowledge on which to build a course-of-study. Other groups built on these to fill out the details of a curriculum that would incorporate case-based, small-group learning

In the winter of 1985, this new curriculum, known as the New Pathway, was approved as a demonstration project for 24 students. The number was increased to 40 in the next year and in the following year was adopted for the entire first-year class except for those in the Harvard-MIT (HST) program. At the same time, a new educational building was completed, designed to accommodate the tutorials and societies that were hallmarks of the New Pathway.

Dan’s aspirations for HMS went beyond the education of medical students. An active scientist from his days as a medical student, he had forged a noteworthy career in the field of membrane transport. He brought this interest with him on returning to Harvard; his wife Magdalena was an active collaborator and maintained their laboratory on a day-to-day basis. Thus, it was natural that Dan be concerned about the School’s activities in the sciences basic to medicine, as he called them. Shortly after his arrival a new Department of Genetics was established and one of us (PL) came from NIH to lead it. (Serendipitously, the MGH shortly afterwards started an effort in molecular biology which was incorporated into the new department, now represented both at the School and in a hospital.) In time, all with the interests of strengthening and integrating core basic sciences, other new or reorganized departments emerged representing contemporary thrusts in biomedical research. For each of these, a world-wide search was conducted to find the best possible leader.

With this new emphasis, it was imperative to grow and reorganize graduate study in the Division of Medical Sciences. With dedicated work from within the science faculty, new courses-of-study were fashioned for graduate students and their numbers greatly increased. The program became and remains of the greatest attraction to undergraduates from this country and abroad. This emphasis on both medical and scientific education converged in the MD-PhD program, and this activity was expanded dramatically. At the same time, physical aspects of scientific research were not neglected; laboratories were refurbished and additional space created.

The social sciences basic to medicine were also not overlooked. A Department of Social Medicine under Leon Eisenberg gathered faculty members concerned with anthropology, sociology, history, ethnography, and medical economics. A Department of Health Care policy was established under one of us (BM) with a span of interests that included: health care financing; quality of, access to, and costs of care; among other areas.

Dan cared deeply about each function and every constituency of the Medical School. He cared about the achievements of faculty members, enjoying their successes and working tirelessly and fulfilling gaps wherever he detected them. He cared about students, not just about their education, but about the quality of the lives they led during their years at the School. One of us (RS) recalls fondly that whenever approached by a student, most commonly during his walks through the Quadrangle, he was always ready to listen and respond to student suggestions, providing prompt follow-up as needed. He was most proud of student achievements inside and outside of academia.

Dan’s accomplishments were recognized both at home and abroad: ten honorary degrees including one from Harvard; the Abraham Flexner Award for Distinguished Service to Medical Education; presidency of the American Academy of Arts and Sciences; membership in the Institute of Medicine, fellowships in the American Association for the Advancement of Science and the Danish Royal Society; as well as appointment to numerous advisory and visiting committees.

Despite all of this, he was easily approachable and a good listener. He was passionate about medicine and science and his enthusiasm for discovery was infectious. He was a tireless advocate for HMS: he took its causes seriously and wanted his listeners to feel them also. This sincerity is what made him such an effective spokesperson and fundraiser; under his stewardship the School’s endowment burgeoned.

After retiring form the deanship, Dan was able to spend more time at his retreat on the Damariscotta River. He loved sailing with family and friends on his sloop, Balena, beyond the seal-packed rocks out of East Boothbay. On such occasions, he would often, and enthusiastically, sing sea chanteys; his intimates sung one as the bell sounded and his ashes distributed in this hauntingly beautiful surround.

Dan Tosteson is survived by his wife, Magdalena, a brother, Thomas, his sons Joshua and Tor, his daughters Ingrid, Zoe, Heather, and Carrie; and five grandchildren. They are joined by many others in mourning the loss of his company.