Changing lives, including her own 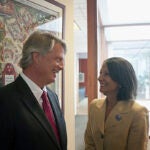 Last summer I met Tom, a bright-eyed and talkative 12-year-old who had an opinion about simply everything. He loved Michael Jackson and would frequently hijack my laptop to watch his music videos, singing along and enraptured with M.J.’s performance. Our communication was a mixture of simple Mandarin and flailing hand gestures and charades, since he did not speak English, and my Mandarin was limited. Throughout the summer, though, we were able to learn from one another (my Mandarin improved, and he picked up English idioms, his favorite being “bird brain”). Tom was a “regular” energetic boy. Unlike most, though, he was growing up in an orphanage.

As a freshman, I became involved with Harvard China Care, a student group that works to improve the lives of Chinese orphans one child at a time. After working toward this mission domestically for a year through fundraising, I had the opportunity to go to one of the orphanages and actually interact with the children I was trying to help.

I spent two months living and working at an orphanage in Luoyang, China. I arrived with only a year’s training in Mandarin under my belt, unsure of what to expect. I had never traveled alone before, and I did not even particularly like playing with kids. Accordingly, I was shocked at how easy it was to connect with the children, and how quickly I found myself growing attached to them.

My stay at the orphanage was a string of moments that reaffirmed my commitment to helping these children, all of whom had distinct personalities. Some were spunky, others were more reserved; some were athletic, others more intellectual; some were mischievous, others conscientious.

I was pleasantly surprised to find that most of the children were hopeful about their futures. One little boy wrote to us, “My name is Shanghua, and my greatest wish is for a kind, loving American family to adopt me.”

While most of the children looked forward to bright futures, others realized they might not be as fortunate. Many of them were abandoned because of disabilities and health problems. Jane, who was in her late teenage years and had only one arm, read me a story she wrote about a sheepdog that took a herd of sheep out to pasture. When one of them fell into a ditch, the dog left it because the dog had to take care of all the other sheep. But later when he fell into a hole and the sheep helped save him, he realized that every life is important. Jane told me she came up with this story after she saw two men abandon a baby at the orphanage.

In spite of solemn moments like this one, at the end of the day the children were still just children. Jane would ask for advice about what to say to a boy she had a crush on. Tom, always vigilant against mushy moments, would cover his eyes during love scenes of movies. Although the children are orphans, that is not all they are, and most of them did not let that label define their identities.

There is one moment I always find myself reflecting upon. During a typical hot and muggy day at the orphanage, a girl named Susan saw my laptop and asked if we could use it together. I ended up acting as a translator while she sat on my lap and video-chatted with one of my friends. Eventually, she lost interest in talking to my friend and refocused her attention on me. She turned to me and said, “Wo ai ni” (“I love you”), and kissed me on the cheek. Not a minute later, she turned back to the laptop and told my friend that he was handsome but looked like a monkey.

Moments like these, however brief, are what have stayed with me. They remind me that my actions can have an impact, however small it may ultimately prove. Having glimpsed the interplay between social policy and health, my experience at the orphanage inspired me to pursue public health policy academically upon returning to Harvard.

To learn more about Harvard China Care or to make a donation.