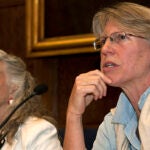 Slavery in the North, and more

Printmaking was a new technology in the 16th century, and artists who created prints for scientific texts not only illustrated the books, they enabled scientific advances by helping early scientists to visualize findings in ways they hadn’t before, according to curators of a new exhibit sponsored by the Collection of Historical Scientific Instruments.

The exhibit, “Paper Worlds: Printing Knowledge in Early Modern Europe,” is on the second floor of the Science Center in the temporary exhibit space managed by the Collection of Historical Scientific Instruments. It was created by 10 graduate students and a Harvard paper conservator studying the history of science and the history of art and architecture. It was the product of a graduate student seminar, “Prints and the Production of Knowledge in Early Modern Europe,” taught by Susan Dackerman, the Carl A. Weyerhaeuser Curator of Prints at the Harvard Art Museum, and by Katharine Park, the Samuel Zemurray Jr. and Doris Zemurray Stone Radcliffe Professor of the History of Science.

Students who signed up for the class were involved in a semester-long exhibit-building exercise that included conducting background research, searching Harvard’s various museum collections for appropriate material, designing and building the exhibit itself, and even creating a 100-page catalog and accompanying Web material.

Adam Jasienski, a graduate student in the history of art and architecture, said a major benefit of the class was being able to handle so much historical material that is studied in other classes, but that students rarely get to see.

“I’m an early modernist, but we don’t have a class that gets you so close to these objects,” Jasienski said.

Stephanie Dick, a graduate student in the history of science, agreed, saying that the course provided a hands-on lesson in material culture.

“I find it interesting in the history of science, we are interested in material culture, but we rarely really deal with materials,” Dick said. “This class was an in-your-face experience in the materiality of materials.”

The idea for the class grew out of a series of seminars on prints and knowledge that Dackerman and Park collaborated on over the past several years. It is an unusual collaboration, teaming up the seemingly disparate disciplines of art history and the history of science. But Dackerman and Park’s take on the importance of printmaking to early scientific efforts binds the two disciplines together.

“Artists were already looking at natural objects and describing them in detail, but scholars weren’t,” Park said. “The visual skills of looking and seeing, which are part of the skill set of artists, began to be integrated into the skill set of doctors and medical professionals. Scientists became more interested in the details of scientific reality.”

Robin Kelsey, the Shirley Carter Burden Professor of Photography and chair of the Harvard University Committee on the Arts, said that although there have been student-created exhibits at Harvard before, what’s special about the printmaking exhibit is that its creation was integrated into the course, as opposed to the individual student efforts that resulted in most prior student-created exhibitions.

“To my mind, this is exemplary. It’s a terrific initiative and a great way to bring the collections and students together and produce new ways of thinking,” Kelsey said.

Kelsey said he believes this sort of effort will be happening more because the University is committed to making its collections’ vast resources a more integral part of student education.

Associate Provost for Arts and Culture Lori Gross echoed Kelsey’s comments, saying that better integrating the collections into Harvard’s educational mission is a key recommendation of the 2008 report of the Task Force on the Arts.

“‘Paper Worlds’ is an eloquent manifestation of a key recommendation of the Task Force on the Arts,” Gross said. “By integrating Harvard’s vast collections with innovative courses, the power of these amazing resources can reverberate through faculty, museum curators, and students to enrich the University as a whole.”

The exhibit, Dackerman said, is interdisciplinary, drawing on materials from several Harvard museums, including the Houghton Library, the Countway Library of Medicine, the Botany Libraries at the Harvard University Herbaria, the Harvard Art Museum, and the Collection of Historical Scientific Instruments.

“The students used the vast resources within the Harvard collections to create an interdisciplinary exhibition on how printmaking enabled the production of new knowledge in the fields of botany, anatomy, astronomy, cartography, [and others],” Dackerman said. “It allowed knowledge to be conceptualized in new ways. Printmakers’ roles were not merely that of illustrators, but as participants in the creation of knowledge in those proto-scientific fields.”

The exhibit itself is organized around several themes: Thinking Visually, which emphasized the relationships between early modern theories of cognition and emotion; Animating Bodies, exploring how anatomical prints were used to produce knowledge of the body; Constructing Scale, illustrating that the prints often showed details and features beyond simple reflections of their subject matter; Printing Time, exploring engraved instruments such as sundials in relationship to printed images depicting the passage of time; and Making Prints, explaining the printmaking process itself.

The exhibit features several notable pieces, including a 16th century botanical encyclopedia and the woodblock used to make its intricate prints, sundials and engravings, single-leaf sheets and book illustrations, as well as several scientific instruments.

“Paper Worlds: Printing Knowledge in Early Modern Europe,” is on display through Aug. 27. The gallery is open from 11 a.m. to 4 p.m., Mondays through Fridays.