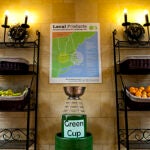 Walton is currently an assistant professor of religious studies at the University of California, Riverside. His research addresses the intersections among religion, politics, and popular culture.

“Harvard Divinity School is among the premier centers of theological education and hubs of academic inquiry,” Walton said. “I am honored and humbled to join such an amazing scholarly community, particularly since HDS has a proven track record of neither resting on its reputation nor being lulled asleep by its laurels. Its continued commitment to recruiting and cultivating cutting-edge scholars of religion in general, and of American religion in particular, makes it the place I want to be.”