Treatment resistance in some cancer cells may be reversible 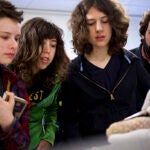 The ability of cancer cells to resist treatment with either targeted drug therapies or traditional chemotherapy may, in some cases, result from a transient state of reversible drug “tolerance.”  In a paper that will appear in the journal Cell and is being released early online, Harvard researchers at the Massachusetts General Hospital (MGH) Cancer Center report finding small populations of drug-tolerant cells from several different types of tumors and identifying aspects of the underlying mechanism.

“While resistance to cancer drugs can result from rare, pre-existing genetic mutations that emerge in response to treatment, accumulating evidence has pointed to additional nongenetic, potentially reversible mechanisms,” says Jeffrey Settleman, PhD, of Harvard’s graduate program in Biological and Biomedical Sciences and the MGH Cancer Center, who led the study.

“In cell lines derived from several different types of cancer we found subpopulations of cells that display a transient ability to tolerate exposure to toxic drugs, which was associated with structural changes in the cells’ DNA and points to a therapeutic strategy that could potentially prevent resistance from developing,” said Settleman, the Laurel Schwartz Professor of Medicine at Harvard Medical School.

When cells within a tumor that had responded to treatment resume uncontrolled growth, drug therapy is usually stopped.  But there have been many reports indicating that some tumors can regain sensitivity to the previously ineffective treatment after a “drug holiday.”  In order to investigate the mechanism underlying that phenomenon, the researchers tested several tumor-derived cell lines against drugs to which the original tumors were known to be sensitive.

In each of the lines they examined, a small number of tumor cells survived exposure to concentrations of drug 100 times greater than levels that killed the vast majority of the cells.  But when these drug-tolerant cells were placed in an environment without the drug, their offspring eventually regained sensitivity to the drug.

Further investigation revealed that drug tolerance was associated with changes in gene expression, implicating alterations in chromatin, the chromosome structure consisting of DNA wrapped around a protein scaffolding. The researchers found that a particular chromatin-modifying enzyme was required for the development of tolerance, and while no currently available drug inhibits that protein, agents that block an associated group of enzymes did cause the death of drug-tolerant but not drug-sensitive cells.

“We believe this kind of reversible drug resistance may be a fundamental property of many tumor cell populations,” says Settleman.  “Determining whether what we see in cell cultures will translate into what happens in patients is essential, and we’ve already started a clinical trial to see if combining a chromatin-modifying agent with the targeted lung-cancer drug erlotinib [Tarceva] may prevent or delay the development of resistance.  We’re also using our cell culture models to further explore the underlying mechanisms.”