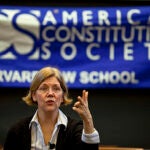 Judith Dollenmayer ’63 was in the first class at Radcliffe College to receive Harvard degrees. And she was the first woman president at the Harvard Club of Washington, D.C.

Now, the former congressional aide has added a different sort of first. Last month, she was in New Orleans on the first public service trip for Harvard alumni co-sponsored with the Phillips Brooks House Association (PBHA).

More such alumni events are already planned for next year, one of many indicators that service trips are a growing movement at Harvard, among present and former students alike. “All the trends we see here are increasing drastically,” said Gene Corbin, executive director of PBHA, Harvard’s largest undergraduate group and the source of year-round regional public service.

And Harvard’s January intercession, new this year, immediately became a vehicle for prolonged service trips. Students went to Uganda to fight malnutrition, to El Salvador to promote literacy, and to the Dominican Republic for a water purification project. Even sports played a role. The Harvard women’s squash team traveled to northern India to combine court instruction with academic tutoring.

Last month, the Harvard Alumni Association (HAA) teamed up with PBHA and PBHA-Alumni, which is one of the HAA’s 35 “shared interest groups.” The resulting working trip to New Orleans was for Harvard alumni who embrace the idea of travel combined with good deeds. The HAA also has designated April as its first Global Month of Service.

“Public service has been a critical activity for Harvard alumni for generations, and we wanted to recognize it this year,” said Philip W. Lovejoy, the HAA’s deputy executive director.

For next year, said PBHA’s Corbin, there’s already strong interest in shifting some of the alternative spring break trips to January, a move that would allow for longer service and better justify the expense of traveling to faraway places.

The public service trend is fueled in part by the spotlight shown on the issue by Harvard President Drew Faust, said Corbin. “Faust is using the bully pulpit of the Harvard presidency to say: Public service is valued at Harvard. It’s an important use of your time while in school, and public interest careers represent a valuable use of your Harvard education.”

Starting April 5, there will be a Public Service Week at the Harvard Kennedy School (HKS), five days of panels and programs on health care, public sector careers, race, poverty, human rights, urban schools, employment, and other issues. HKS students have historically brought their scholarship and energy to local municipalities. They also maintain a Student Public Service Collaborative to integrate service into the School’s culture.

Then there is the growing alumni effort. Last May, the HAA co-sponsored Harvard’s first Global Day of Service with the Harvard Graduate School of Education. About 300 alumni and students volunteered for projects in 13 cities.

Last month’s alumni work trip to New Orleans was a warm-up for the HAA’s Global Month of Service (April 1-30), one of four “Harvard Serves” initiatives. This month, there will be more than 75 volunteer opportunities in 20 cities on four continents. Volunteers will help to clean up riverbanks, tutor schoolchildren, work at rescue missions, and build houses.

Starting this week (April 2), the HAA will launch its “Public Service on the Map” Web site so that alumni, students, faculty, and staff can register their projects. Said Lovejoy, “We’re billing it as an instant connection to Harvard’s public service community throughout the world.” The site will include listings of volunteer opportunities, internships, and jobs.

Teresita Alvarez-Bjelland ’76, M.B.A. ’79, president of the HAA this year and a resident of Oslo, Norway, has made Harvard’s global public service the theme of her tenure. As to the breadth of the projects around the world, she said, “I am thrilled and proud.”

Among Harvard graduates, the potential for doing good is enormous. There are nearly 365,000 Harvard alumni worldwide, and 181 Harvard clubs (105 in the United States and 76 in other countries).

The plight of Gentilly

During the alumni work trip in New Orleans last month, 22 alumni and friends gathered in a sun-parched lot in Gentilly. In 2005, Hurricane Katrina had turned a vibrant neighborhood into a fetid lake 5 feet deep. Today, every third house is still abandoned, adults scramble for work, and children wander restlessly after school.

The Harvard volunteers spent six days sprucing up two narrow frame houses owned by the Pentecost Baptist Church, which lost half its congregation after Katrina. The volunteers scraped, painted, washed, fixed, and gardened. They ate box lunches and slept in college dorms. On their last day, though New Orleans is famous for fun, they elected to stay on the job.

Corbin was there, in a T-shirt and shorts, brushing on paint and nailing boards. After six days, the two houses looked “markedly different” even from a block away. “It makes an enormous contribution to a neighborhood struggling to rebound following the devastation of Hurricane Katrina,” he said.

Dollenmayer, the alumna who is now a freelance writer and editor, climbed a stepladder to reach a painted-over stained glass window. “I was happy to come and help, and I’m having a great time,” she said in a YouTube video posted by an alumni trip blogger, “though this task is maddening.”

The work site on Harrison Avenue, in a part of Gentilly called Pilotland, contains two low houses, a sweep of grass, a parking lot, and a one-story church, where the high-water flood mark once reached the height of a man.

The Rev. Lionel Davis Sr., the 54-year-old pastor of Pentecost, watched the Harvard volunteers work. Dressed in a black suit and a New Orleans Saints ball cap, he contemplated the devastation. Once teeming and vital, he said, the neighborhood now is “one of those communities where you have to bring them from nowhere to get them somewhere.”

Nick Harris, compact and affable, stood near the New Orleans work site. He’s assistant vice president for community and economic development at Dillard University, and helped to coordinate the HAA volunteers. “The benefit of having Harvard come in speaks volumes — to what’s not been done in this area since 2005,” he said. Having Harvard here, added Davis, “allows the community to have a bigger voice.”

Bringing his share of hope was Clifton Dawson ’07, an alumni volunteer. Fresh out of three seasons as an NFL running back, the highest-yardage Ivy League ball carrier has his sights set on Harvard Business School in the fall. Meanwhile, he was managing a painting crew.

“I thought it would be a good way to give back,” he said of the alumni trip, “and to reconnect with Harvard.”

Young and old, graduates and students, the volunteers talk about the same benefits: the satisfaction of moral effort, the value of immersion in other cultures, the thrill of camaraderie, and the sense that learning does not come from books alone — that not all competence can be measured by a grade.

Tutoring writing in the same school was freshman Schuyler Milender ’13, who blogged nightly about her experiences. Appreciating the immensity of resources at Harvard, she said, made it imperative for her to give something back.

“I have been given so much, and these people are so underserved,” said Milender of students who can’t write paragraphs and who have lost pivotal schooling because of Katrina, and all against a backdrop of abandoned houses. “I feel like I’m learning a lot. It’s putting things in perspective for me,” she said. “I wanted to lend my support, even for a week. ‘’

Such short-term help has its critics, who suggest it doesn’t make a difference. But student volunteers do important work, said Hal Roark, executive director of the Broadmoor Development Corporation. He said they establish frameworks for future action, provide continuity, and assure an ongoing sequence of eager volunteers. Roark draws help from students at Harvard, Yale University, and Bard College, many of whom return as summer or even yearlong fellows.

A few feet from Roark’s office, in a rambling frame house, eight Harvard undergraduates hunched over computer screens to prepare for the next day’s work. Four were navigating the legal system that can delay rebuilding blighted houses. The others worked on a project to help seniors weatherize their houses, part of a Salvation Army program called EnviRenew.

“I’m not a big beach person,” said Sarah Legrand ’10, part of the second group, explaining why she was there. “Time-limited but immersive experiences” during school breaks are important. “I’m glad to take advantage of it.”

Gratitude for these service trips takes many forms. In Hayneville, Ala., Martin McCall Sr., pastor of the 78-member Hayneville Church of Christ, watched Harvard undergraduates put the finishing touches on the congregation’s new church. (The first burned in a 2008 fire.)

The volunteers, who spent six days tiling, painting, and staining, are “angels from heaven,” said the 57-year-old mason, who grew up in the segregated Jim Crow South. “They’ve got good manners, they catch on, they’re eager to learn. They’ve been putting forth a great effort here.”

And the benefits are mutual, said Marcel Moran ’11, a pre-med student and one of four co-leaders on the Hayneville trip. He peeled off his work gloves and surveyed the busy work site. He said that he has made his best friends on these trips, that he has learned to break out of solitary learning to work cooperatively, and that there are special rewards in doing physical work that demands its own kind of precision.

For reflections: Students and alums share thoughts on service