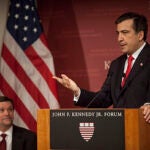 Harvard University today (April 23) announced that Sumner M. Redstone has contributed $1 million to be used by Harvard College and Harvard Law School. This contribution by Redstone, a graduate of both Schools, will establish scholarships for 20 Redstone Scholars to attend Harvard College for the 2010–11 academic year. Additionally, Redstone’s gift will furnish funding for 10 postgraduate public service fellowships at Harvard Law School.

The Sumner M. Redstone Undergraduate Scholarship Fund will provide financial assistance to deserving men and women at Harvard College. The fund will support undergraduates from a broad range of socioeconomic backgrounds who demonstrate a commitment to public service reflecting the civic ideals of President John F. Kennedy.

“I am deeply grateful to Mr. Redstone for this generous gift. It will help ensure that Harvard College is accessible to students who hold service to the public good as a fundamental value,” said Michael D. Smith, dean of the Faculty of Arts and Sciences and John H. Finley Jr. Professor of Engineering and Applied Sciences. “These immediate-use scholarships support the College’s strong commitment to creating a diverse and outstanding undergraduate class each year.”

Martha Minow, dean of the faculty and Jeremiah Smith Jr. Professor of Law, said, “In the 50 years since John F. Kennedy inspired a generation with his call to service, Sumner Redstone has steadfastly answered that call throughout the course of his extraordinary career and as a visionary leader in our society. Now, with these fellowships, he shares his inspiration by supporting the newest generation of lawyers who wish to make a difference in the lives of their fellow human beings. I am enormously grateful for his vision and leadership. The 10 recipients of his generosity will magnify his contribution many times over, by helping untold numbers of people. As President Kennedy’s brother Robert said, each time a person acts to improve the lot of others, ‘he sends forth a tiny ripple of hope, and crossing each other from a million different centers of energy and daring, those ripples build a current that can sweep down the mightiest walls of oppression and resistance.’”

Redstone said, “As a graduate of both Harvard College and Harvard Law School, I have experienced firsthand the culture of excellence and public service that is a fundamental tradition of these great schools. Harvard’s longstanding commitment to leadership through enlightenment and engagement provides an outstanding foundation for the next generation of leaders for the U.S. and around the world.

“As the 50th anniversary of John F. Kennedy’s presidency nears, we reflect on how his influence sparked an era of optimism, activism, and national service. I have established these scholarships to help celebrate President Kennedy’s spirit by fostering a focus on education and a renewed commitment to public service. I am honored to have the opportunity to recognize and encourage these admirable young men and women.”

The recipients of the scholarships announced today will be chosen based on criteria that include a commitment to public service that reflects President Kennedy’s civic ideals.

Redstone has recently awarded more than $100 million in charitable grants to fund initiatives in the United States and abroad. His contributions have funded research and patient care advancements in cancer, burn recovery, and mental health at several major nonprofit health care organizations, and have provided support for groups that care for impoverished children in Southeast Asia.