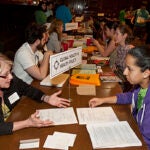 A la carte for freshmen

More than 1,000 students packed into Sanders Theatre a few weeks ago for an event that was — as we called it in our original pitch materials — “something new and different.” The concept was simple enough to fit on a bumper sticker: “10 professors speak for 10 minutes each about their one big idea.” It was appropriately titled “Harvard Thinks Big,” and its production and success were the culmination of a year and a half of work by a team of Harvard undergraduates that included me.

Though much of the excitement surrounding “Harvard Thinks Big” in February can be explained by its scope — by the posters that emphasized “This is Harvard,” by marketing the session as a “buffet of Harvard thinking,” by the all-star professors on the bill — the cause of the excitement was something deeper, an element of truth that universities need to pay more attention to if they care about their research hitting home with students and the population at large, if they care about academia’s ability to generate passion and change the world for the better. The real reason behind the event’s success, and why so many students who had just had of long day of classes submitted themselves to two more hours of lecture, was a simple fact: Ideas excite people.

If you were in the crowd that night, or if you have viewed the videos online at www.HUTVnetwork.com/HarvardThinksBig, you didn’t just hear facts, figures, and data, or even just analyses, templates, and constructs. You heard ideas. Upon reading it put that way, you might have the same worries that others did when we first proposed the concept: that the night would be a “razzle-dazzlefication” of truth, that we were asking professors to (and I quote an original detractor) “dumb down their research into bite-sized chunks devoid of truth for the sake of shallow entertainment, feeding our already-too-short attention spans.”

True, we limited the talks to 10 minutes and asked professors to speak so that everyone in the audience could understand. (The literature professor never said “bildungsroman,” and the computer science professor never uttered the phrase “hardware-embedded hypervisor.”) We did that partly because we wanted the night to bring together various disciplines, to be relevant to all students watching, and, yes, to be fun and entertaining.

The real innovation of “Harvard Thinks Big” (and the West Coast “TEDTalks” that inspired it), though, is not that it made knowledge bite-size. It was that it made professors take their years of work and boil it down to its core, to find the driving force behind their passion for exploration, to find and share the answer to the lingering question: “Professor, what’s the takeaway? What’s the big idea?”

And what they shared was not “truth for dummies” or “truth, glamorized” or “truth, action-packed.” What they shared was an idea, a tremendously important form of veritas that has been lost to many in academia. Ideas are infused with passion. Ideas are often subjective and often have (gasp!) a spiritual element. Ideas are organized and poetic. Ideas are relevant. They take data and make it matter to people. All ideas, as English Professor Matthew Kaiser said that night, “start as emotion.”

Big ideas matter: Cooking is what made us human. Social networks have value. Appreciating religious pluralism is tremendously important to our coming century. Protest is the driving force behind American social change. Coding makes you see the real world differently. We should revolt from the king. An invisible hand drives the market. Workers of the world unite. DNA holds our genetic code. All men are created equal.

Ideas are indeed bite-sized, but — when released — fire the imagination.

True, some ideas have wreaked havoc, especially in the past century. But, more often than not, the excitement they spur has been used as a force for good. And in an age of rising youth apathy, the power of ideas (in their debating, debunking, and implementing) to draw out passion, drive, and excitement in people cannot be ignored.

The ideas of Harvard’s students and professors can be tapped more effectively. We need more opportunities to reflect on “the takeaway,” the thing to hold onto, the thing to fight for or against, the thing to experiment with, to debate, to get excited about. We need more forums to share ideas (and we hope “Harvard Thinks Big” was the first of many such sessions). Ideas need to have a larger university presence. That’s our takeaway, our own big idea: Ideas matter.