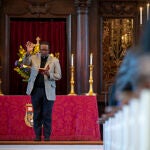 A service for Haiti’s sadness

The prospect of hearing 10 top Harvard instructors lecture for 10 minutes each on the subjects that they care most deeply about drew an overflow crowd to Sanders Theatre on Thursday (Feb. 11).

Harvard Thinks Big, a student-organized discussion that paired leading lecturers with eager listeners, attracted these great minds to help explore and inspire new ways of thinking, in the first session of what organizers hope will become an annual experience.

“It’s an effort to epitomize what’s best about Harvard and [remind people] why we came here in the first place: to hear incredible professors talking about the things that they know best, and to be inspired,” said senior Derek Flanzraich, who conceived of the event along with Peter Davis ’12.

The format was based on the popular Technology, Entertainment, Design (TED) talks, lectures given at the annual TED conference that follow the same tight format, and which have become online sensations.

Before the series of 10-minute talks began, a line of students extended out to the Science Center, patiently hoping to get into the theater, undaunted by a long wait on a cold night.

Gaining a lucky seat close to the front, sophomore Avinash Joshi was eager to listen to his Currier House master, Richard Wrangham, the Ruth Moore Professor of Biological Anthropology in Harvard’s Faculty of Arts and Sciences, as well as the other speakers.

“I think the coolest idea is that they have to explain what they are most passionate about in 10 minutes … what they really care about, deep in their hearts. It’s going to come out tonight, and that’s why I am here.”

Hundreds of students put their studies aside for the two-hour-plus discussion that touched on a range of topics, including violence, evolution, fairy tales, fire, religion, and hip-hop.

Presentation styles ranged from subdued podium deliveries to ones infused with drama, such as the one by Andrew Berry, lecturer on organismic and evolutionary biology, who moved around the stage in a brief “drunken” stumble to help illustrate the confused arc of an important genetic mutation in human evolution.

Lecturer on computer science David Malan ripped a phone book in two at one point, and worked up a sweat as he paced in front of the crowd, discussing the magic of making “machines do your bidding.” He encouraged students to explore fields that they might never have considered, the way he did as a Harvard undergraduate when he took a computer course outside his original government track.

Diana Eck’s big idea was pluralism. Eck, professor of comparative religion and Indian studies and director of Harvard’s Pluralism Project, said she was there to recruit students to study religion, particularly pluralism, the broader engagement and understanding of other people’s faiths.

“The ‘we’ in ‘we the people’ has become far more complex than ever before,” she said. “It will require stretching exercises. It will require all of us to know a lot more about each other.”

For Daniel Gilbert, global warming isn’t happening fast enough to prompt a strong human response. The professor of psychology told the crowd that the reason the world is so slow to act on climate change is because the danger it poses isn’t intentional, immoral, imminent, or instantaneous. He outlined his theory on how the human brain responds to threats. If, in keeping with his “immoral” theory, “eating puppies” caused global warming, Gilbert said, people would be massing in the streets.

Timothy McCarthy, lecturer on history and literature, adjunct lecturer on public policy, and director of the Human Rights and Social Movements Program at the Carr Center for Human Rights Policy at the Harvard Kennedy School, delivered an impassioned talk about the future of protest. He challenged students to embrace the protest spirit of people like Harvard graduate and Civil War Col. Robert Gould Shaw, the commander of the all-black 54th Regiment, who died and was buried with his men.

McCarthy pointed to Gould’s statue in the hall and encouraged the students to “transform their privilege into passion.”

“Brothers and sisters, if we are to have a future filled with freedom and hope and equality, rather than hatred and fear and exclusion, we must act now. Let us rededicate ourselves to [Abraham Lincoln’s] ‘better angels of our nature’ and bring about a new birth of protest.”

The speakers were chosen largely by student request as part of a survey distributed to all undergraduates by the College Events Board in the fall. Harvard Undergraduate Television recorded the event and will post it on the studio’s Web site. Harvard’s Undergraduate Council also helped to plan the program.

Davis and the president of the Undergraduate Council, Johnny Bowman ’11, hosted the evening, and Dean of Harvard College Evelynn M. Hammonds, the Barbara Gutmann Rosenkrantz Professor of the History of Science and of African and African American Studies, encouraged the students in the audience to explore their own big ideas.

“All of us here want you to find your own passion.”

One noticeable absence from the lineup was Michael Sandel, a popular speaker and the Anne T. and Robert M. Bass Professor of Government. He was unable to attend because of a prior engagement. He is a speaker at this year’s TED conference in Long Beach, Calif.