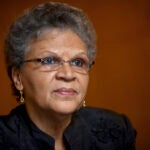 The Harvard Club of Australia Foundation recently awarded fellowships to six Harvard researchers who intend to undertake collaborative scientific research in Australia in 2010.

As in previous years, the foundation’s fellowship grants take the form of donations to the recipients’ host Australian institutions to assist with fellows’ travel and living expenses.

Richard L. Stevens, professor of medicine at Harvard Medical School and professor in the Division of Rheumatology, Immunology and Allergy at Brigham and Women’s Hospital, is a world leader in studying an immune cell known as the “mast cell,” with a special focus on inflammatory bowel disease for which there is no long-term cure. He is collaborating with Steven A. Krilis, in the Department of Medicine at the University of New South Wales and St. George Clinical School, Sydney, and with Paul Foster at University of Newcastle. Stevens will be based in Sydney for his six-month sabbatical.

Jonathan B. Losos, the Monique and Philip Lehner Professor for the Study of Latin America and curator in herpetology at the Museum of Comparative Zoology, will conduct research in Australia on evolutionary diversification of agamids, a family that includes crocodiles. His collaborators are Rick Shine, professor of evolutionary biology, and Mike Thompson, professor in the School of Biological Sciences at the University of Sydney. Losos will spend four months in Australia, and will be based in Sydney, but will collect specimens in Australia’s far north.

John Quackenbush, professor of computational biology and bioinformatics in the Department of Biostatistics in the Harvard School of Public Health and professor of cancer biology at the Dana-Farber Cancer Institute, will study cell networks and cell differentiation and build models to help understand how cells transition from one state to another. His principal collaborator is Christine Wells, a chief investigator at the National Centre for Adult Stem Cell Research at Griffith University, in Queensland, Australia. Quackenbush will also work with Emma Whitelaw, Queensland Institute of Medical Research, in Brisbane, Australia, and Louise Ryan, of Commonwealth Scientific and Industrial Research Organisation, in Sydney. Over his four-month sabbatical based in Brisbane, Quackenbush will use Wells’ existing database of olfactory stem cells to build predictive models incorporating ideas borrowed from theoretical quantum physics.

Ali Khademhosseini, assistant professor of health sciences and technology and assistant professor of medicine at Harvard Medical School, will conduct research on tissue engineering, focusing on micro-scale techniques in applications using biodegradable biomaterials. He will collaborate with associate professor Fariba Dehghani, and director of postgraduate studies at the University of Sydney’s School of Chemical and Bio-molecular Engineering. Their overall aim is to develop long-term collaboration between the University of Sydney, Harvard, and MIT, and to underpin future substantial research grants. Several papers are already in preparation. Khademhosseini will visit Sydney for two months.

James Macklin, director of collections and informatics in the Harvard University Herbaria, and Paul J. Morris, biodiversity informatics manager in the faculty of Arts and Sciences, will study biodiversity informatics. They have an ongoing collaboration with the Australian National University (ANU), and the Australian National Herbarium Centre for Biodiversity Research, specifically with Greg Whitbread and Jim Croft. Their visit to ANU is aimed at advancing the International Plant Names Index (IPNI), an ongoing collaboration between Harvard’s Herbaria and Australian National Herbarium in Canberra, and to prepare a technical implementation proposal of international significance for consideration by the Harvard-Kew Gardens-Australia IPNI management team.