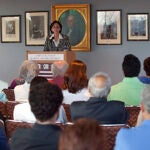 One of the nation’s leading educational authorities reiterated Tuesday (April 6) her often-reported warning that American public schools are in peril — perhaps more than ever.

What was unusual, however, about Diane Ravitch’s presentation at the Askwith Forum of the Harvard Graduate School of Education was her approach: What she once championed to save the system is now, she contends, leading to its demise.

“The passion for test-based accountability has turned into a monstrous obsession with data that threatens the quality of education,” said Ravitch, an education historian who served in the first Bush administration’s Education Department.

“I’m not actually opposed to testing. I believe testing can be very valuable when testing is used for informational and diagnostic purposes,” she said. “What I am opposed to is misuse of testing for accountability purposes.”

She singled out “the naïve belief that test scores are infallible and certain.” Rather, “They should be used with caution.”

“I’m not opposed to choice [in selecting to attend a charter school]. I think everyone should have choices. But I oppose choice when it is used — as it has been in some places — as a conscious strategy to undermine public education.”

Once a vocal proponent of standardized testing and charter schools, Ravitch often clashed with progressives. But in her 20th book, “The Death and Life of the Great American School System: How Testing and Choice Are Undermining Education,” she decried the mandates of the No Child Left Behind Act (NCLB); indeed, she suggested that an alternative book title could be “Lies Our Policymakers Tell Us About School Reform.”

Ravitch insisted she has not “done a 180” degree turn in her thinking. Rather, she said, she always has pushed for all children to have a quality education. “I’ve long been a critic of the rising tide of mediocrity,” she said. “I hoped, perhaps foolishly, that accountability and choice would help us reach [those ends]. And I think now I was wrong.”

Schools and teachers are being punished for failing to reach impossible standards, so schools are “gaming” test results to improve scores, she said. Using 1998 to 2009 data that examines the skills of children who grew up under the No Child strictures, “there is not one iota of improvement,” she said.

She compared using test scores to evaluate schools to judging a baseball player by a single at-bat, saying scores should only be only one element in evaluating a school. “Even Babe Ruth struck out more than he homered,” she said.

Charter schools, once heralded as an alternative to regular public schools, do not get better results, she said. Moreover, they represent only 1.5 million out of 50 million public school students. The focus should be on the majority, she said.

Ravitch slammed President Barack Obama for supporting punitive action against schools that fall short of standards. That, she said, encourages schools to recruit better students to raise scores, rather than help those most in need. She saved her harshest critiques for Congress, accusing lawmakers of knowingly passing impossible and unproven standards. “It is unethical for Congress to mandate remedies that are impossible to achieve,” she said.

Ravitch’s new approach has plenty of skeptics and critics; two of them participated in Tuesday’s forum.

Martin West, assistant professor of education at the Harvard Graduate School of Education, hammered both Ravitch’s research and her conclusions, accusing her of a lawyerlike habit of choosing only those facts that support her case and ignoring those that don’t. Ravitch’s book, he said, presents “no studies showing choice destroys education.”

Moreover, Ravitch “ignores the failings of the system that [reforms] were intended to improve,” West said.

Daniel Koretz, Henry Lee Shattuck Professor of Education, addressed Ravitch by wondering, in effect, where she was when the act was being formulated.

“We didn’t have to wait for NCLB [to pass] to know these policies are impossible,” he said.

Still, he agreed with Ravitch that education policymakers “charge along blissfully, unaware of evidence.”