Preserving both planet and profits 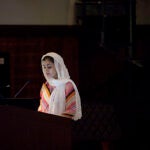 After focusing on technology strategy for many years as a professor at Massachusetts Institute of Technology’s Sloan School of Management, Rebecca Henderson finally took a sabbatical. With time for leisure reading, and at the urging of her brother, a freelance environmental journalist, she decided to explore the literature on climate change.

The sobering facts and figures that she found made her want to leave academia, she told a group of HBS students, faculty, and staff at the Harvard Business School (HBS) last Thursday (April 22).

“I was interested in doing something about global warming,” said Henderson, the School’s Senator John Heinz Professor of Environmental Management.

Luckily, her “green” friends convinced her that as a business professor she was poised to make a difference in an area that really counted: corporate America. So, she shifted her academic focus and joined the faculty at Harvard Business School.

Henderson delivered her remarks as part of the annual HBS Earth Day celebration, a series of events dedicated to raising awareness of sustainability. Her current research centers on large companies that work to build new businesses or improve their efficiency using sustainable practices and technologies.

“What we need is a clear-eyed focus on the bottom line, linked to a deep sense of moral purpose. I think that is what leadership in the age of climate change looks like.”

Henderson said she was hopeful and inspired by the many large corporations adopting stances that merge a successful business model with a moral imperative to make a difference on the environment.

The concept isn’t new. She offered the example of Johnson & Johnson, established in 1886, which incorporated the notion of helping people into its founding credo, and noted that today more CEOs are weaving a commitment to the common good into their mission statements.

Additionally, there are tremendous opportunities for innovation and profit in responding to the environmental crisis by developing wind and solar power and rethinking the world’s water, agriculture, and recycling systems, said Henderson.

Leaders who build communities dedicated to a common goal and who successfully bring the language of a common moral purpose into the daily fabric of their companies, while at the same time making sound economic decisions, are the ones who will succeed, she said.

“It’s really about understanding the uniting of the two … [and] taking this seriously as a guide to decisions and actions.”