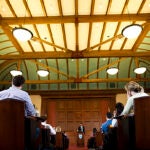 The second-largest continent is the subject this month of Harvard Africa Focus, a series of lectures, panels, and performances formerly called “Africa Week.”

This year, official events stretch for 13 days, through April 18. Add in related events on African languages and on hip-hop, and Harvard’s celebration of 53 countries and 1 billion people goes all the way to May 1.

No matter what the event, hope and optimism are the underlying themes. Africa Focus comes with a subtitle: “Reimagine, Redefine, Reinvent: A New Paradigm for Africa’s Leaders.”

Leadership was a leitmotif from the start during Africa Focus. The keynote address, on April 5, was by Ambassador Johnnie Carson, a 37-year U.S. diplomat and former Peace Corps volunteer in Tanzania. After service in Kenya, Zimbabwe, Uganda, Botswana, Nigeria, and elsewhere, he is now assistant secretary of state for the Bureau of African Affairs.

Carson spoke about “U.S.-Africa Relations in the Age of Obama.” His take? The new administration sees Africa as a strategic partner.

“It was a lot of positive messaging about America’s respect for Africa,” said Ghana native Cheryl Klufio of the keynote. She is a communications officer at the Radcliffe Institute for Advanced Study.

Other speakers have included Gen. William E. “Kip” Ward, the first head of the U.S. Africa Command, on an April 7 panel on diplomacy, development, and defense. An April 10 panel on leadership and governance in Africa featured former ministers from Mali, Ghana, and Nigeria.

On Monday (April 12), there was a public conversation at the Harvard Kennedy School with Babatunde Fashola, the youngest governor of Lagos State in the history of Nigeria.

In events to come, there will be other African leaders, along with scholars, jurists, and performers.

Friday through Sunday (April 16-18), speakers and panelists at Harvard Law School’s 2010 Harvard African Law and Development Conference include a supreme court justice from Ghana, a vice president for World Bank Africa Region, and high-level jurists from Sierra Leone and Uganda.

Panels will look at a wide range of issues, including development, natural resources, conflict, technology, business, harmonized legal systems, and national health insurance (co-sponsored by African Students at Harvard Medical School and the Africa Health Forum at the Harvard School of Public Health).

The April 16-18 conference is sponsored by the Harvard African Law Association, one of a long list of Africa Focus sponsors in the fields of law, medicine, and government. Principal underwriters are the Carr Center for Human Rights Policy, the Ash Center for Democratic Governance and Innovation, the Institute of Politics, the Kennedy School Student Government, and the Committee on African Studies (CAS).

CAS coordinates Africa research and teaching at Harvard, where 300 Africa-related courses are taught in public health, history, politics, literature, and other disciplines.

CAS is also expanding the reach of Africa events at Harvard this month. On Thursday (April 15) is the final iteration of Africa Language Theater Night at Harvard, featuring word play in 18 languages, including Amharic, Dinka, Hausa, Igbo, Swahili, Twi, Wolof, and others. (Co-sponsor is the Harvard University African Languages Program.)

On April 30 and May 1, CAS will pair with Harvard’s Center for Middle Eastern Studies to present “The Language of Global Hip Hop Culture,” a conference and teacher-education event on using hip-hop as a window onto art, culture, and social norms in Africa and the Middle East. Case studies will include hip-hop writing and performances in Arabic, Swahili, Persian, Wolof, and Hebrew.

Africa Focus still has a lot of punch left this month. But the past was not bad either.

Klufio went to other Africa Focus events, including one on the media and social change on the continent (April 6) and another on rebranding Africa through youth (April 8). And on April 10 she went to “Africa Night 2010: An African Odyssey,” two hours of dancing, music, and fashion shows at the New College Theatre.

There was joy and drumming and dance and fashion, fly and fresh. But the frame of the odyssey was two old men in traditional garb who set out with their walking sticks — humorously clueless — to find Europe. “There is always bad news,” one says in the beginning. “That’s why I want to leave this land.”

In the end, the old men decide not to go, but not before they have arrived, naïve and droll, in Mali, Nigeria, and other places where a modern Africa peeks out. “Is this Europe?” one old  man asks early on. “No,” a pretty girl replies. “You are in South Africa.”

Soon after, one old man asks the same question so many Africans are asking themselves today. “Why are we going to Europe?” he says. “It is so beautiful here.”