Often, we are what we were 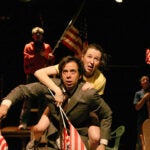 Ask babies who they are, and they’ll babble something that seems nonsensical. Turns out, they’re onto something.

Jerome Kagan, a developmental psychologist and the Daniel and Amy Starch Professor of Psychology Emeritus, has spent the past 30 years of his lengthy career studying the temperaments of those little people, which originate in a child’s unique biology, along with the experiences that shape their personalities. These discoveries are summarized in his new book, “The Temperamental Thread.”

Twenty percent of Kagan’s 4-month-old infant subjects were labeled high reactive, “a behavioral profile marked by vigorous motor activity and crying to unfamiliar experiences.” And 40 percent were labeled low reactive because they showed the opposite behaviors. Both temperaments are modest predictors of future personalities, depending on how children responded to their environments. (Another 40 percent belonged to neither group.)

“The high-reactive infants are biased to become children who are timid, shy, and cautious in unfamiliar situations. This is a personality trait known as inhibited,” said Kagan. “The low reactives are biased to develop into outgoing, spontaneous, fearless children — uninhibited.”

Kagan also explores links between temperament and gender, ethnicity, mental illness, and more. The difference between males and females is always newsworthy fodder, and, according to Kagan, “over the past 50 years, many scientists have discovered intriguing biological differences between males and females that imply different patterns of temperaments in girls and boys.”

Kagan said he’d always been curious about the mind and “the persistence of beliefs that are not in accord with experience,” and recalled arguing at a young age with his mother, who believed in inborn traits of personality.

“During the 1940s and ’50s, many citizens and social scientists believed that the main, if not the only, cause of the problems that plague our species were childhood experiences,” said Kagan. “This belief was an heir of Freudian ideas and the confidence of behaviorists, who were demonstrating the power of experience to shape animal behavior. It followed that anyone who discovered the specific experiences that led to a mental illness, crime, or school failure would be a hero doing God’s work. Who would not entertain the idea of becoming a child psychologist, given this Zeitgeist?”

Although retired, Kagan still enjoys collaborations with colleagues Nancy Snidman of Children’s Hospital and Assistant Professor of Psychiatry Carl Schwartz, and has begun to write “a set of essays on some contemporary but controversial issues that surround the meanings and measurements of the concepts of happiness, morality, brain bases for psychological states, and mental illnesses.”

But what about Kagan’s baby subjects? Where are they now? “Infant temperaments act to limit what children will become; they do not guarantee a particular personality,” he noted.

“A life itinerary is like the game of ‘Twenty Questions.’ Each new piece of information eliminates a large number of possibilities, but many still remain.”