Matters of life and death 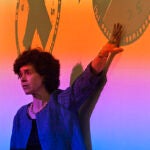 Preserving both planet and profits

In 1987, on her first day at her new job in Washington, D.C., Carol Steiker was handed two giant notebooks by her predecessor and was told, “The boss really cares a lot about this.”

Her new boss was U.S. Supreme Court Justice Thurgood Marshall, and what he cared passionately about was opposing the death penalty. As a result, Steiker, his new clerk, became well-versed in issues related to capital punishment, and in the intervening years has come to care deeply about the topic herself.

A group of graduating Harvard Law School (HLS) students listened to parting advice on Wednesday (April 21) from Steiker, who has made studying and teaching classes on capital punishment a large part of her life’s work. The professor took part in the last of four discussion sessions sponsored by the School’s 3L class marshals that let HLS scholars offer the departing class some final words of wisdom.

“I promise you, there is nothing more satisfying than to work on something … that you care passionately about,” said Steiker, who delivered a talk she titled “Why I Am Against the Death Penalty, and Why You Should Be Against Something Too.” The Howard J. and Katherine W. Aibel Professor of Law described her opposition to the penalty in both procedural and moral terms, and encouraged audience members to “find their inner indignation and harness it for good.”

In the procedural realm, recalling the campaign of former presidential hopeful Michael Dukakis, she noted that capital punishment has become a “hot-button political issue,” and that intense pressure is put on elected officials to support it. Steiker said that many observers felt Dukakis’ presidential hopes were dashed when he famously remarked during a 1988 debate that he wouldn’t back the death penalty even if his wife were murdered.

“It’s hard to overstate how the death penalty has played such a potent role in politics.”

Steiker also called funding for capital defense in the United States “horribly inadequate,” and said there “is just simply no will to correct this.”

Governments face major demands on their budgets in areas such as health care and education, so passing appropriation or tax bills for lawyers to defend hardened criminals is not a priority for state and local officials, said Steiker.

On moral grounds, Steiker, who frequently debates death penalty proponents, worried in part that extreme punishments done in the name of the “public” and “justice” would have a “wearing effect on certain crucial aspects of human nature,” including “the ability to identify — have compassion with — other people, especially people who are different from the way we view ourselves. … We need to protect [these] sensibilities and capacities that are central to moral agency.”

But turning the audience into death penalty abolitionists wasn’t the goal of her talk, said Steiker. Her aim, she said, was to convince listeners to find their own passion, and to use their “enormous talents, energies, and excellent educations” in pursuing it.

There is tremendous suffering and injustice in the world, said Steiker, and “you are among the people in the world most equipped to make a difference.”