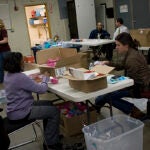 Helping outside the classroom

Former U.S. Supreme Court Justice David H. Souter will deliver official words of wisdom to the Class of 2010 next month at Commencement. Until then, a new “Last Lecture” series organized by the Senior Class Committee is giving College seniors a less formal venue for parting words of inspiration from some favorite professors.

“With just eight semesters here at Harvard, many of us have not had the chance to hear from all the tremendous professors in Harvard’s faculty, or to dig into all the topics we’d hoped to during college,” said senior Ami Nash, a marshal for the Class of 2010. “We hope this series can help in introducing the Class of 2010 to some of Harvard’s most fascinating thinkers.”

The “Last Lecture” series kicked off Thursday (April 1) with a talk by Nicholas Christakis, professor of medical sociology and medicine at Harvard Medical School, professor of sociology in the Faculty of Arts and Sciences, and master of Pforzheimer House.

Christakis spoke to a full Lowell Junior Common Room on his study of the spread of behaviors through social networks, framing some of his research themes as advice to the graduating seniors as they prepare to head into the world.

“Your thoughts and your feelings and your body depend on those around you,” he said. “As you better yourself, that betterment can ripple out to hundreds or even thousands of other people.

“Good things are required for social networks to flourish,” he added, referring to his findings that beneficial attributes such as happiness and altruism, as well as positive behaviors such as voting and exercising, can spread through social networks.

Christakis told the assembled students that 70 percent of them will end up marrying someone within three degrees of themselves in their social network.

“Your social network will fold up around you and, like a yenta, introduce you to one another,” he said.

Nash says the “Last Lecture” speakers are faculty identified by graduating seniors as formative in their college careers. More lectures will take place on upcoming Thursdays, and are free and open to the Harvard community.

Speakers in the “Last Lecture” series include:

Judith Palfrey, T. Berry Brazelton Professor of Pediatrics and master of Adams House, May 6, 5:30 p.m., location to be announced.