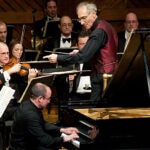 David H. Souter, a native New Englander and Harvard alumnus who served nearly two decades on the U.S. Supreme Court before stepping down in 2009, will be the principal speaker at the Afternoon Exercises of Harvard’s 359th Commencement.

“During his years on the nation’s highest court, Justice Souter approached the vital work of judging with a deep sense of independence and fairness, a close attention to the facts of each case, and a clear concern for the effects of the court’s decisions on the lives of real people,” said Harvard President Drew Faust. “The dedication, humility, and commitment to learning with which he has pursued his calling should be an inspiration to any young man or woman contemplating a career in public service.”

Justice Souter was appointed to the high court by President George H.W. Bush in 1990. The extensive legal experience he brought to the position, and his polite but persistent questioning of the lawyers who appeared before the court, helped to shape many of the most closely watched cases of our time.

“Many of the people who will be joining the ranks of Harvard alumni on May 27 are eager to make a difference in the world, through the arts and sciences or through community service or engaging in public affairs,” said Teresita Alvarez-Bjelland, president of the Harvard Alumni Association. “Justice Souter is a prime example of someone who has made a profound contribution to society not by seeking the limelight but by selflessly devoting himself to serving the public good.”

Justice Souter was born in Melrose, Mass., in 1939 and moved to New Hampshire at age 11. He graduated from Harvard College in 1961 and studied at Magdalen College, Oxford, as a Rhodes Scholar, after which he returned to Harvard and received a degree from the Law School in 1966.

After two years in private practice, he was named an assistant attorney general of New Hampshire, and he became the state’s attorney general in 1976. He served on the Superior Court of New Hampshire and that state’s Supreme Court before being named to the U.S. Court of Appeals for the First Circuit. Soon after, President Bush tapped Souter to replace Justice William J. Brennan Jr. on the Supreme Court.

While he was on the court, Justice Souter was known to return whenever he could to his farmhouse in Weare, N.H., favoring hiking in the nearby mountains and quiet time for reading over the public speaking circuit.

While maintaining a low-key public profile, he developed a reputation for long hours in his chambers and careful study of the issues brought before the court. When Justice Souter announced his intention to retire, President Barack Obama said he had shown what it means to be a “fair-minded and independent judge.”

“He approached judging as he approaches life,’’ the president said, “with a feverish work ethic and a good sense of humor, with integrity, equanimity, and compassion — the hallmark of not just being a good judge, but of being a good person.”

Souter will speak during Commencement day’s Afternoon Exercises on May 27, which serve as the annual meeting of the Harvard Alumni Association. The exercises will take place in the Tercentenary Theatre of Harvard Yard, between Memorial Church and Widener Library.