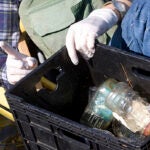 The Harvard Graduate School of Design has appointed Krzysztof Wodiczko as professor in residence of art, design, and the public domain, effective July 1, said Dean Mohsen Mostafavi, the Alexander and Victoria Wiley Professor of Design.

Wodiczko is currently a professor and head of the Interrogative Design Group in the Center for Advanced Visual Studies at the Massachusetts Institute of Technology.

Wodiczko is renowned for his large-scale slide and video projections on architectural façades and monuments. He has prepared more than 80 such public projections for Australia, Austria, Canada, England, Germany, Holland, Ireland, Israel, Italy, Mexico, Poland, Spain, Switzerland, and the United States. Since the late 1980s, his projections have involved participation by marginalized and estranged city residents. Simultaneously, he has designed and helped to create a series of nomadic instruments and vehicles with homeless, immigrant, and war veteran operators, for their aid and communication.

His work has been exhibited in Documenta, Paris Biennale, Sydney Biennale, Lyon Biennale, Venice Biennale, Whitney Biennial, Kyoto Biennale, Yokohama Triennale, and in many other major international art festivals and exhibitions. He and architect Julian Bonder have designed the Memorial to the Abolition of Slavery in Nantes, France, which is under construction.

Wodiczko was awarded the Hiroshima Prize in 1998 for his contribution as an artist to world peace. He also has received the Skowhegan Medal for Sculpture, the Gyorgy Kepes Award, the Katarzyna Kobro Prize, and the “Gloria Artis” Golden Medal from the Polish Ministry of Culture. In 2009 he represented Poland in the Venice Biennale, developed the War Veteran Projection Vehicle in Liverpool, the Veterans’ Flame project at Governors Island in New York, and presented the “Veteran Project” (an interior video-projection installation) at the ICA in Boston. He is currently developing public art projects in Poland and France.

The work of Wodiczko has been the subject of numerous publications, including “Critical Vehicles: Writings, Projects, Interviews” (1999), “Krzysztof Wodiczko: Guests” (2009), and “City of Refuge: A 9/11 Memorial” (2010).