From lab trash to treasure 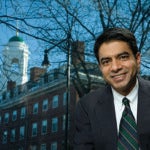 Harvard’s used and surplus lab equipment is finding new life in laboratories in the developing world through the efforts of a former graduate student and two groups of current students who collect, organize, and ship beakers, centrifuges, and other items to where they’re needed.

The effort, undertaken by the students and fellows at Harvard’s Longwood and Cambridge campuses, diverts equipment that would otherwise find its way into the waste stream. Instead, it is collected, cleaned, cataloged, and then sent through a nonprofit organization begun several years ago by a Harvard grad student to underequipped labs in developing nations.

“I started working in a lab my freshman year, and I didn’t realize how much I took for granted,” said Denise Ye, a Harvard College senior, molecular and cellular biology concentrator, and a founder of the Harvard College student group. “[Disposable] pipette tips — I’d throw out a box of them a day — I didn’t know that labs in Africa reuse them.”

Ye and fellow senior Xun Zhou, a chemistry concentrator, started the undergraduate student group during their sophomore year, modeling their organization after a similar one operating on Harvard’s Longwood Campus. Both groups work closely with Seeding Labs, a nonprofit launched by then doctoral student Nina Dudnik, who began collecting surplus lab equipment while studying molecular biology in the Graduate School of Arts and Sciences.

Dudnik said she became aware of the desperate needs in overseas labs when she worked as a Fulbright Fellow in the Ivory Coast before coming to Harvard in 2001. While in Africa, she worked on agricultural development in a lab that was so poorly supplied that it was common practice to wash, dry, and reuse “disposable” plastic test tubes for as long as three months.

She suffered a case of laboratory culture shock when she came to Harvard, and she recalls walking the halls at night seeing discarded equipment left outside the lab doors to be picked up for disposal.

“It’s a waste stream at most universities, and it’s not a waste stream that anyone is paying attention to,” Dudnik said. “People are buying new equipment all the time.”

“Seeding Labs is a wonderful example of a group that has succeeded in recovering resources that aren’t state of the art for use at Harvard, but are still useful to others,” Gogan said. “Nina tells me that the used microscopes, centrifuges, and freezers we have picked up from Harvard laboratories are extremely helpful in the South American and African labs to which they have been shipped.”

To aid the effort, the University provides storage space in Allston and Longwood, and the equipment is shipped several times a year. Gogan expressed gratitude to the Allston Development Group of Harvard Real Estate Services and Harvard Habitat for Humanity, which let the student organizations use their warehouse in Allston.

The equipment — 140,000 pounds shipped so far — is most often used but still serviceable. Often it is being replaced by newer and faster models, or, in the case of something like pipette tips, was overordered and is sitting unused in supply closets. Older equipment is a welcome addition to faraway labs.

“The equipment that is most commonly used, it’s most likely to be surplus, but it’s also most likely to be needed overseas,” said Amanda Nottke, a graduate student in Harvard Medical School’s departments of Genetics and Pathology and an organizer of the Longwood effort.

Though there is a constant stream of donated equipment coming in from working labs, Nottke said more arrives when a laboratory moves or closes and discards equipment it no longer needs. In those cases, working labs get first dibs on equipment, but there is often plenty left over and unwanted. Seeding Labs maintains an online database and allows overseas institutions to build a “wish list” for equipment they particularly need, Nottke said.

Seeding Labs does charge a small fee for the equipment, about a tenth of what it would cost to purchase, Dudnik said, which augments funding from foundations and individuals for the nonprofit’s operations. Though Dudnik has reached out to other universities, Harvard’s many laboratories in Cambridge and Longwood still provide the bulk of material sent overseas.

Though giving a second life to lab equipment is the heart of the effort, relationships established along the way are leading to scientific and cultural exchanges as well, Nottke said. In the fall, Harvard Medical School’s Genetics Department and Massachusetts General Hospital’s Molecular Biology Department will sponsor student “ambassadors” who will travel to Kenyatta University in Kenya for several weeks as part of an exchange that will promote cultural as well as scientific understanding.

Nottke said the ambassadors, who haven’t been named yet, would be asked to blog about their experiences and make presentations upon their return.