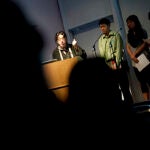 The power of visual storytelling and the paradigm shift created by both the democratization of filmmaking and the advent of social networking tools brought together academics, movie industry professionals, and budding change agents — demographic groups not accustomed to rubbing elbows — for film screenings and a lively conversation about the possibilities of film as a vehicle for social activism.

Sponsored by the Harvard Kennedy School’s Center for Public Leadership, the inaugural Gleitsman Social Change Film Forum (April 16-17) featured screenings of two documentaries from this year’s Sundance Film Festival. “Countdown to Zero” examines the risk of nuclear proliferation, nuclear terrorism, and accidental nuclear exchanges. “A Small Act” describes how an anonymous gift to help educate a boy in Kenya created a ripple effect, with one act of kindness leading to another and then another, in a widening circle of impact.

Faculty members from across the University joined in the panel discussions, including: David Ager, codirector of undergraduate studies and lecturer on sociology at the College; Graham Allison, director of the Kennedy School’s Belfer Center for Science and International Affairs and Douglas Dillon Professor of Government; Peter Galison, documentary filmmaker and Joseph Pellegrino University Professor of the History of Science and of Physics; David R. Gergen, director of the Center for Public Leadership and Public Service Professor of Public Leadership; Rod Kramer, visiting professor of public policy at Harvard Kennedy School; and Robb Moss, filmmaker and Rudolph Arnheim Lecturer on Filmmaking.

“It seems like every young leader wants to be a social change agent,” said Gergen during the open panel on April 16. “And visual imagery is very important to this generation — but they don’t know much about the film industry.”

The ensuing conversations touched on a range of topics, including:

The changing understanding of what constitutes a film.

“Connected,” a film that Shlain is making about systems thinking, will ultimately exist as an 80-minute feature, in a 10-minute version for educators, and in an even shorter version for viral dissemination. “What we’re seeing here is a paradigm shift,” said Barrett. “Tiffany is helping us rethink what we mean by a film.”

Brain science and the time-tested ingredients of good storytelling.

Advances in neuroscientific understanding have shown that “the brain is more hard-wired for sociability, for engaging with others, and for empathy than we had realized,” said Kramer. “The brain developed as a visual-auditory sensory processing system, which, when you think about it, is what film does.” A film is successful to the degree that it connects to the audience emotionally, said Guttentag. “Story and character are the two most important elements for helping people connect with a film.” Libresco agreed, adding that the elements of good story making include “great characters, each of whose lives has an arc; the layering of multiple stories; beautiful cinematography; and the ability to make audiences cry and laugh.”

New technologies for building an audience for a film.

When “An Inconvenient Truth” was released in 2006, Twitter didn’t even exist, and Facebook’s potential was just beginning to be understood. Today, these tools enable people to interact immediately with the social issue addressed by a film that moves them. Interactive media also have created “a shift in power,” said Shlain. “As a filmmaker, you can now have direct access to your audience. You don’t have to work through a distributor.”

Social change films promote “accelerated crowd learning,” said Barrett, borrowing a phrase from Sarah Palin’s recent address to a Tea Party gathering in Boston. A good film, artfully told, can be a “platform for a more complicated strategy for bringing about social change.”