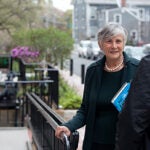 Stuck in a 15-by-15-foot cell for more than two years, McCain, a prisoner of war in Vietnam, wrote that such isolation “crushes your spirit and weakens your resistance more effectively than any other form of mistreatment.”

In 1985, Anderson was the chief Middle East correspondent for the Associated Press in Lebanon when he was kidnapped by members of an Islamic militant group. He was held for almost seven years, much of that time in solitary confinement.

“The mind is a blank. Jesus, I always thought I was smart. Where are all the things I learned, the books I read, the poems I memorized? There’s nothing there, just a formless, gray-black misery. My mind’s gone dead. God, help me,” Anderson wrote in his 1994 memoir “Den of Lions.”

A noted author and Harvard doctor, perhaps best known for advocating a surgical checklist to help avoid operating room mishaps, spoke to a young crowd at Harvard Law School April 7 about the effects of long-term solitary confinement, a practice he equates with torture. Atul Gawande, who recently penned an article for the New Yorker on the topic, discussed the experiences of McCain and Anderson, as well as the cases of prisoners held in solitary confinement in the United States. During his talk the surgeon explored the physical and mental effects of such confinement, and the reasons the practice is so prevalent in the United States.

In a 1992 study of former prisoners of war, Gawande noted that brain scans of the men revealed that the most severe brain abnormalities were found in those who had suffered “head trauma to the point of losing consciousness, or simply solitary confinement.” The mental effects of such isolation include hallucinations, panic attacks, lethargy, and despair. After three years, Gawande said Anderson feared he was “losing his mind,” and resorted to repeatedly banging his head against a wall before his guards were able to stop him.

Research indicates solitary confinement does nothing to quell violence among prisoners, and is ultimately harmful to the general public, said the surgeon. He noted that prisoners subjected to such isolation are less able to deal with social settings as a result of being deprived of human contact, but that they are typically released back into society.

According to Gawande, the United Kingdom has almost completely rid its prison system of the practice. By contrast, the United States has at least 25,000 prisoners in solitary confinement.

If prolonged isolation is so intrinsically cruel, Gawande wondered aloud, “How do we end up with a prison system that subjects more of our own citizens to it in recent history?”

In the United States, the continued practice of solitary confinement in prisons across the country is directly linked to the public’s acceptance of the practice, he said.

“We learn very quickly that public sentiment is the reason that solitary confinement has exploded here,” said Gawande, adding that the support of such isolation is a “generational” construct.