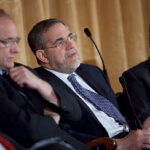 In Margaret Atwood’s futuristic The Year of the
Flood, sex workers wear “Biofilm Bodygloves” to
protect themselves from infection. It turns out,
though, that a prototype bodyglove may have
already been invented. We call it the skin. Living
inside the dermis, alongside connective tissue,
blood vessels and collagen, are immune system T
cells, armed with the ability to fight off infection.

HMS researchers found that the old-fashioned
skin-scratching smallpox vaccine generates these
skin-resident T cells, creating an internal bodyglove
of smallpox immunity inside the skin—an
effect not seen with injected vaccines. This discovery
runs counter to the longstanding assumption that vaccines trigger the
same immune response
no matter how they are delivered. The findings,
led by Thomas Kupper, suggest that it may be
possible to design vaccines that place the strongest
immune defenses at the borders of the body,
giving it the power to beat infections before they
sneak in.

T cells provide immunity by memorizing a
viral antigen during vaccination or infection, recognizing
it during a later infection and killing the
infected cell. This kind of immunity is different
from humoral immunity, in which antibodies recognize
antigens and recruit other immune cells to
fight the infection. One additional key difference
is location: antibodies circulate in the blood while
T cells embed themselves in peripheral tissues.

More than Scratching the Surface

Kupper, the Thomas B. Fitzpatrick professor of
dermatology at HMS and Brigham and Women’s
Hospital, first learned in 2006 that skin-scratching
vaccines activate T cells in the skin. T cells triggered
by a skin-scratching vaccine begin their
travels in skin-draining lymph nodes. These
lymph nodes generate three populations of armed
T cells: the front lines that home back to skin,
called effector memory T cells; the backup troops
that flow through the circulatory system, called
central memory T cells; and a small cadre of effector
memory T cells that home to other peripheral
tissues such as the lungs or the gut.

Kupper’s latest work compared different modes
of vaccination, including skin scratching, intramuscular
injection, and injection into the gut, to
find out if different vaccination modes stimulate
distinctive types of immunity.

He and first authors Luzheng Liu, HMS assistant
professor of dermatology, and Qiong Zhong,
a former HMS research fellow, found that skin
scratching provided the most effective protection.
Mice vaccinated with this method eliminated the
virus from infected skin within six days while mice
immunized via injection destroyed some but not
all viral copies.

To tease out which types of immunity provided
this protection, Kupper systematically eliminated
portions of the immune response. He eliminated
the antibody response by running the same test in
mice incapable of forming antibodies. The skinscratched
mice cleared the virus in six days while
others did not, showing that antibodies play a key
role in injected, but not skin-scratching, vaccinations.
He then eliminated central memory T cells
by blocking the exits of lymph nodes. Again, the
skin-scratched mice cleared the virus completely
while the viral load for all other immunization
types remained high. The work appeared in the
February Nature Medicine.

“This elegant experimental work shows that
skin scarification is a potent way of activating cellular
immunity,” said Wayne Marasco, HMS associate
professor of medicine at Dana-Farber Cancer
Institute, who is investigating novel approaches to
the influenza vaccine.
“This is an important biological observation that
no one recognized before.”

Taken as a whole, the research suggests that it
might be possible to design vaccines with “anatomically
flexible protection,” said Kupper. “If we
could come up with the right cocktail of modifiers
for getting T cells to the right peripheral tissue, we
could vaccinate in a sort of physiologically and
biologically relevant way.”

For instance, imagine a malaria vaccine that
could stimulate skin-resident memory T cells that
quash infection from a mosquito bite. Imagine an
HIV vaccine that builds a protective barrier of T
cells in genital mucosa. “The idea,” said Kupper,
“is to pair the biology of how you get infected
with the right immune response. It’s a new way of
thinking about vaccination.”

“This work shows that the way we are vaccinating
now is probably completely wrong,” said
Rachael Clark, HMS assistant professor of dermatology
at BWH, who, along with Kupper, first discovered
protective, long-lived, skin-resident T cells
in 2006. “By injecting antigens into muscle, we are
ignoring millions of years of evolution that have
designed organisms to produce complex and multifaceted
immunity to agents that come through
epithelial surfaces such as the skin.”

Kupper and colleagues are continuing research
to validate their hypothesis that tissue-resident
cells provide important protection against infectious
diseases. “It’s fun to hypothesize about this
idea,” said Kupper, “but we have to demonstrate it
further in the laboratory.”