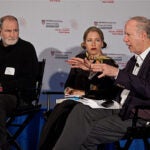 The best bulwark against potential Russian aggression in the Black Sea region of Eastern Europe is the spread and establishment of democracy, the president of the nation of Georgia told an audience at the John F. Kennedy Jr. Forum on April 19.

But that means democracy in all its expressions, including free elections, free speech, free assembly, and the right to disagree with the government, said Mikheil Saakashvili, who was elected president of Georgia in 2004 after the so-called “Rose Revolution,” which ejected the incumbent administration.

“The best guarantee of our security is a democratic, stable Georgia state that has built lasting partnerships with Western institutions,” he told the crowd at the Institute of Politics at the Harvard Kennedy School. “Security in our perception cannot be separate from democracy or stability. They are two sides of the same coin. Georgia is a small country that is directly being undermined by a military superpower. Its security cannot rely … on its army or the number of its weapons.”

Saakashvili, who studied at Columbia University and the George Washington University National Law Center, became the youngest president in Europe when elected in 2004. He was re-elected early in 2008. In August 2008, tensions between Georgia, which was once part of the Soviet Union, and Russia escalated into a military confrontation, something that Saakashvili referenced many times in his remarks.

“Our democracy has had no choice but to grow and mature at gunpoint,” he said. “Today over 20 percent of our territory is occupied.”

Yet the overall thrust of Saakashvili’s remarks was positive. His humor, good looks, and charisma were on full display as he spoke of Georgia’s success in combating organized crime, poverty, and corruption. Saying Georgia now has a “meritocracy,” he described what he called the country’s economic vigor and transformation in the post-Soviet world.

But, he acknowledged, “The fate of our nation still remains unclear.” Continued security means social responsibility, economic opportunity, freedom of expression, and tolerance of minorities, Saakashvili said. When security forces do not run the state, there is support for institutions, not just for personalities, he said.

“Security is knowing that if your leadership fails to deliver on their promises, you can replace them without taking to the streets or rallying the intervention of a foreign power,” he said.

Reform has, however, a limited window of opportunity, he added. Leaders must use their initial popularity to enact reforms because they likely won’t be popular for long. Then, after new reforms take hold and if their popularity rises, they may be able to enact more reforms, he said. But, he emphasized, “The window is very small.”

At times, Saakashvili almost sounded like an American conservative in his calls to reduce the size of government and support a free-market economy, saying Georgia public spending is kept to no more than 30 percent of GDP. He said he resists calls for regulation.

Georgia is at a crossroads, he said, trying to make its way between “Yeltsin chaos” (a reference to former Russian leader Boris Yeltsin) and “Putin-style stability,” a reference to the often-criticized strong-arm tactics of Russian ex-president and current Prime Minister Vladimir Putin.

The invasion, he insisted, only underscored how Georgia’s new democratic institutions were robust. “As Russian tanks were advancing toward the capital, the whole society united in support of the institution,” he said. “No crime, no riot, no panic.”