Being prepared, not scared 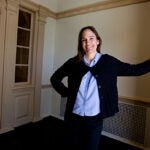 Warning against the dual threats of complacency and unrealistic expectations, Secretary Janet Napolitano of the U.S. Department of Homeland Security urged Americans Thursday (April 15) to “be prepared, not scared” in confronting domestic and international terrorism. Napolitano gave a speech and answered student questions during an appearance at the John F. Kennedy Jr. Forum.

The secretary provided an overview of her department’s latest efforts to track and interrupt terrorist plots and operations, which can range from violent extremists at home to cyber attacks launched from afar.

“Securing America against these threats — while simultaneously expediting the legal flow of people and commerce, and staying true to the values and rights that define our nation — is the essence of the 21st century enterprise we call homeland security,” she said.

Napolitano cited the “heightened law enforcement presence” at the nation’s airports and the sharing of resources among federal, state, and local agencies to confront threats “on the frontlines” more effectively. She also urged citizens, businesses, and communities to develop and discuss their emergency preparedness plans in order to “get smarter and better equipped to deal with a range of potential emergencies.”

“Terrorism is a tactic designed not just to kill, but to make us feel powerless. But we are never powerless,” Napolitano said. “We control the way we prepare ourselves, the way we anticipate and combat the threats, and the way we respond if something does happen.”

Answering questions by audience members who criticized current U.S. enforcement tactics, Napolitano said, “There is a crying need for immigration reform,” but she acknowledged that we are “a nation of laws.”

Napolitano said a framework for immigration reform recently proposed by U.S. Senators Charles Schumer and Lindsey Graham will help to update enforcement efforts to deal more effectively with such critical issues as family unification and illegal immigrants already in the country.

“If we want a better set of laws, there [are] no better people than the people in this room to make sure it happens,” she said. “As policymakers, you can advocate and vote … Washington, D.C., needs to hear that it is now time to move forward.”

Napolitano’s forum appearance at the Harvard Kennedy School was part of a two-day visit to New England.