A church of words 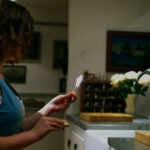 From class to Cannes

Call him a preacher, a soothsayer, a shaman, a poet. It’s the last that Jericho Brown goes by, but it takes all of the above to write lines like “The loneliest people have the earth to love and not one friend their own age” (from “Odd Jobs”).

Brown, the Radcliffe Institute’s 2009-10 American Fellow, read Wednesday (April 21) inside the Radcliffe Gymnasium from “The New Testament,” his newest collection of poems.

Born to a New Orleans churchgoing family, Brown read with the breathless urgency of a reverend to a hoard of sinners. Before launching into “Another Elegy,” his opening poem, Brown’s command over the audience was palpable. Lapsing into a silence so long it might otherwise be deemed uncomfortable, Brown could’ve predicted the world’s end and no one would’ve budged.

Instead he spoke: “Expect death in all our poems. Men die. Death is not a metaphor. It stands for nothing and represents itself. … It enters whether or not your house is dirty. Whether or not your body is clean.”

Both texts are soaked with death; yet as bleak as Brown’s poems can sometimes be, his performance of them — though never shy in intensity — is a catharsis.

“I was raised in a church where part of growing up was about getting in front of people and doing what we saw our pastor doing every Sunday,” he recalled. “You have to be able to give over to an audience for them to enjoy it. So I think that’s ingrained in me, no matter what I’m doing.”

In “Another Elegy,” a different poem with the same title, Brown read: “Every night, / I take a pill. Miss one, and I’m gone. / Miss two, and we’re through. Hotels / Bore me, unless I get a mountain view, / A room in which my cell won’t work, / And there’s nothing to do but see / The sun go down into the ground / That cradles us as any coffin can.”

“I think of every poem as its own character, so I do my best to embody that character,” said Brown, who won the prestigious Whiting Award while at Radcliffe. The coveted honor, which carries a $50,000 prize, is given to writers in the early stages of their careers who show extraordinary talent and promise. Brown is author of the book “Please” (New Issues, 2008), and teaches at the University of San Diego.

In “To Be Seen,” Brown read: “You will forgive me if I carry the tone of a preacher, / Surely, you understand, a man in the midst of dying / Must have a point, which is not to say that I am dying / Exactly.”

Brown handled those thoughts by writing. “I felt like I could deal with that feeling if I wrote about that feeling,” he said.

“To Be Seen” takes its title from a doctor’s appointment (“the doctor will see you now”), and in the poem Brown confronts disease, mortality, the doctor he does not trust:

My doctor, for instance, insists on the metaphor of war;

Die fighting.  I even remember him saying the word siege

When another rash returned.  Here I am dying

And, like God the Father, say through clenched teeth,

Look at me when I’m talking to you.  Your healing is

Not in my hands, though I touch as if to make you whole.

Noting the lack of joy in his poems, Brown called himself an elegiac poet, but admitted he is really a happy person. “Maybe the joy hasn’t gotten into my writing just yet,” he said. “But it will.”