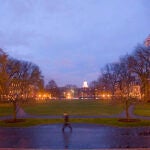 “Wow, he’s a rock star,” said an audience member at the Radcliffe Gymnasium as she watched the afternoon’s speaker pose for photos and sign autographs for a steady stream of admirers.

But this pop icon in a dark blue blazer and sensible shoes wasn’t a singing sensation, but an economist.

Using data and statistics, Steven Levitt, professor of economics at the University of Chicago, makes a habit of “bringing economics into our lives.” Prostitutes, cheating teachers, real estate agents, sumo wrestlers, and even drug dealers are part of his domain (as are the names that people give their children). In 2005 Levitt and Stephen J. Dubner of The New York Times authored the best-seller “Freakonomics: A Rogue Economist Explores the Hidden Side of Everything.”

“I took on a bunch of topics … that nobody else wanted to study, and I think it’s exactly the reason … I’ve been able to succeed,” Levitt told the crowd in his remarks Monday (March 22). “If I tried to take the real topics, the hard questions that real economists are doing, I don’t think I would have had any success whatsoever.”

Sometimes his topics prove unpopular. In one of his most controversial papers, which became part of the 2005 book, Levitt examined the links between abortion and crime. He argued that the legalization of abortion in the 1970s corresponded with a drop in the crime rate about 20 years later, since those “unwanted” children — who Levitt said would have been more likely to grow up under difficult circumstances and subsequently would have been more likely to become criminals — hadn’t been born.

His latest book, “SuperFreakonomics: Global Cooling, Patriotic Prostitutes, and Why Suicide Bombers Should Buy Life Insurance,” has been widely criticized for its claims about climate science.  During his talk, the author addressed critics who have challenged the book’s chapter on global warming, noting that he and co-author Dubner took on the topic in a “peculiar way.”

The economist was at Harvard to take part in the 2009-10 Dean’s Lecture Series at the Radcliffe Institute for Advanced Study.  The lectures are part of the institute’s Academic Engagement Programs (AEP), which sponsor projects with Harvard faculty, Radcliffe Institute fellows, and Harvard students in scholarly and research endeavors. The AEP also sponsors lectures, conferences, and symposia.

The 1989 Harvard graduate said he knew early on that economics was his calling. Leaving an introductory class on the topic that had his friends perplexed, he remembered being amazed that they taught “such easy things at Harvard.”

“For me [the class] was just mostly putting names on the things … I had always thought. I had always, I guess, thought like an economist, I just didn’t know it.”

“Sometimes you’ve just got to go with the only thing you are good at,” Levitt continued, describing how he was nicknamed “the rational man” by a classmate, and he created an algorithm to assign his 12 Harvard roommates to three rooms. He even used his economic prowess at the racetrack while in college, employing computer data to figure out which horses were more likely to win.

But despite his aptitude for economics, the alumnus admitted he was surprised that he gravitated toward academia. He was even more surprised when he was admitted to a Ph.D. program in economics at the Massachusetts Institute of Technology.

“It’s kind of crazy that they ever let me in,” he said, recalling his poor grades in math.

But Levitt has since won numerous awards, including the 2003 John Bates Clark Medal, which recognizes leading economists under age 40. In 2006 he was named to Time magazine’s list of “100 People Who Shape Our World.” His advice has even been solicited by the Central Intelligence Agency.

During his talk, he outlined several of his research projects, including work done with the help of an intrepid young researcher who infiltrated a drug-dealing gang in Chicago. Together they discovered that the gang’s organizational chart resembled that of McDonald’s, with a group of leaders called the “board of directors” and hundreds of “branches” or “franchises.”

“They very self-consciously were styling themselves after corporate America.”

Levitt also offered the crowd his perspective on a free-market economy.

“I think that anybody who wants to solve the world’s problems is going to have to do it through capitalism with some kind of twist,” he said, adding, “There are certain things governments are outstanding at doing, but running economies has just proven not to be one of them.”